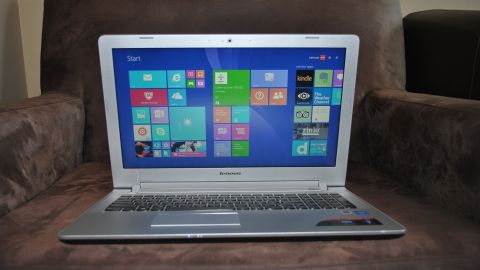 Although the Z51's sleek design and awesome display are gorgeous to look at, this laptop just doesn't have enough under the hood to make it worth considering.

If you're in the market for a laptop that can handle the rigors and demands of an academic environment, the Lenovo Z51 might be ideal for you.

One such competitor is the Asus ZenBook UX305 – a laptop that we awarded a five-star rating earlier in the year. The Z51 also stacks up well against the Acer Aspire V7, a 14-inch laptop that performs almost as well as it looks.

That said, it's not all about looks and compatibility with other devices. What happens under the hood is oftentimes more important than how the hood looks.

The black with silver-trimmed exterior of the Z51 gives it a substantive feel, like a tank or a warship. This laptop means business.

Unlike Lenovo ThinkPad units that feature mostly black textures with red lettering, the Z51's black exterior bleeds into the silver, brushed-metal finished keyboard and monitor, creating a symmetrical look that's stunning from front-facing and side angles. This laptop is more Yoga than it is ThinkPad, for sure.

Although Lenovo continues to add too much border around its display, unlike competitors such as Dell, the Z51's Full HD (FHD), 1,920 x 1,080 resolution screen is a delight to view. Images are crisp and detailed. With the screen brightness turned up you get a dynamic, cinematic feel.

Unfortunately, the screen is matte non-touch, which is disappointing given its proximity to the Windows 10 launch. The Aspire V7 and ZenBook UX305 both feature similar FHD displays, but the Acer unit features touch functionality.

I'm typically not a huge fan of Lenovo keyboards, but the Z51 has one of the best keyboards I've ever used. It has chicklet style keys that run almost all the way across the 15-inch device. The keys include a number pad for those of you who input massive amounts of data during the school or work day.

The keys themselves are super responsive, with just enough click and clack to let you know when you'd made a selection.

The touchpad features a matted finish that is helpful in letting you know how close to the edge of the pad's frame you've come. Rather than enclose the pad in a thick piece of plastic, or sink it down a few centimeters, Lenovo simply wrapped the pad in a slightly raised, silver-brushed material. Beneath the touchpad is the clickpad, which is a bit extreme at almost four inches wide, but it's not so extreme that it upset my experience.