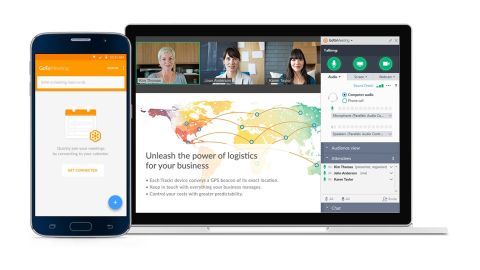 If, on the surface, GoToMeeting seems like your average everyday video conferencing service, that’s because it is. Complete with all of the customary features you expect from this type of software, our only hold ups with GoToMeeting are that its own join.me service is a better value than its Starter plan and that the Pro and Plus plans are frankly more expensive than competing plans from Zoom and RingCentral.

Before the advent of the internet, it used to be that if you wanted to hold a seminar with 250 people who all work in different buildings, you would have to go through quite a few hoops. First of all, you would have to reserve a room large enough to accommodate such a vast population of employees. Then you would have to schedule (and pay for) all of their flights into the city where the meeting is set to take place.

Obviously that gets expensive and inconvenient for everyone involved. And while it sounds fun to experience a new place on company dime, the reality is that business trips don’t spare you much time for tourist attractions. So then what if businesses could teleport employees to a centralized location, free of last-minute Expedia bookings and conference room reservations? Better yet, what if they could hold quarterly meetings for no more than $39 (£30) a month?

Those are both questions cloud-based software as a service (SaaS) company LogMeIn tries to answer with GoToMeeting, a piece of video conferencing software that – if it’s not careful – could cannibalize the sales of another application we recently reviewed. That’s right, LogMeIn is responsible for the continued support of not only GoToMeeting, but for maintaining join.me as well.

That being said, these two services, GoToMeeting and join.me, are intended to tailor to two very different audiences. Whereas join.me targets small businesses in need of no more than the most basic features, LogMeIn caters to teams of every size and is particularly compelling at its midrange and top-end tiers.

Even so, compared with competing services from other companies, such as RingCentral Meetings and Zoom, the two GoToMeeting plans that are most likely to be viable for your company are also more expensive. Nevertheless, there are a handful of unique qualities that do make GoToMeeting the better video conferencing software option for some, though admittedly they’re few and far between.

Let’s take a look so you can decide for yourself whether or not GoToMeeting is worth its premium price tag.

Like the vast majority of its rivals, GoToMeeting comes in three different flavors, i.e., subscription packages, at a range of different prices. The GoToMeeting Starter plan is “great for Small Teams,” the Pro plan is for “small and medium businesses,” or SMBs and, lastly, the GoToMeeting Plus plan was created for “large businesses.”

As for the cost of GoToMeeting, you can expect to shell out more than you would for comparable plans from RingCentral Meetings and Zoom, which makes it a tough sell for businesses seeking a cost-effective solution for arranging and conducting video conference calls. The pricing of all GoToMeeting plans is based on the assumption that your business is willing to commit to a one-year contract.

The most affordable of the lot is GoToMeeting Starter, which will set your company back $14.99 (£11.55) per month. Of course, that’s no more than what you would otherwise pay for RingCentral Essentials and Zoom Pro, but unlike GoToMeeting, both of those companies have free options for their services in case you’re curious to test the waters before diving right in.

GoToMeeting, instead, has a 14-day free trial that doesn’t require you to hand over any credit card information, though it does demand a business email. Back to the Starter plan, the small business-focused GoToMeeting plan supports up to 10 participants, web audio, HD video, screen sharing and the ability to dial into conferences using a phone or VoIP service.

The Starter plan of GoToMeeting is perhaps the most confusing, seeing as LogMeIn’s other video conferencing service, join.me, costs just $5 (£3.85) more a month and allows for up to 250 participants per meeting in addition to all of the other features of GoToMeeting Starter. For that reason, despite costing a little more, join.me is a better value than GoToMeeting Starter.

Still, there’s reason to consider the Pro and Plus plans that GoToMeeting has on sale. With the $29.99 (£23.10) per month GoToMeeting Pro plan, you get all the features from GoToMeeting Starter, plus video conferencing can ramp all the way up to 150 participants. Furthermore, administrators can “freeze” meetings before participants enter using a feature LogMeIn calls MeetingLock. Transcripts, personal meeting rooms, unlimited recordings, drawing tools, keyboard and mouse sharing are also included, as well as an active directory.

With GoToMeeting Plus, the price is bumped up to $39.99 (£30.80) and up to 250 participants can join your video conference calls. Large meeting support and conference room integration are added too.

Ultimately, LogMeIn’s other video conferencing service, join.me is a better value than GoToMeeting’s most basic Starter plan. Thus, we’re looking at two possibilities – GoToMeeting Pro and Plus – that may be worth the investment from your business. Sadly, both of those two plans cost more than the equally full-featured options from RingCentral and Zoom. Pretty much everything we mentioned in our rundown of GoToMeeting Pro and GoToMeeting Plus can be found elsewhere from providers just as reliable as, if not more reliable than, LogMeIn.