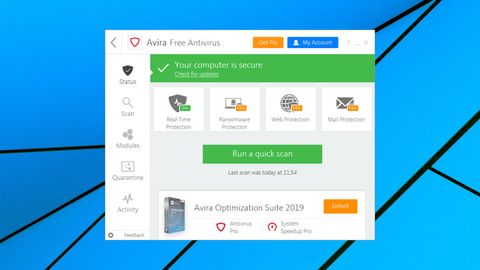 Avira boasts good detection rates, as ever, but you'll get more features and functionality elsewhere.

Avira Operations is a German security giant which provides mobile and desktop antivirus products for every level of home and business user.

There are some catches, too. Avira Free doesn't include automatic scanning of emails, downloads or USB devices, for instance. These are layers of protection you'll get with competitors like Avast, although Avira should still detect any threats if they're launched or during normal scans.

The free package is also missing Avira's enhanced ransomware protection for the very latest, evolving threats. It'll still detect existing dangers and many others, but you're not getting the same level of security as paying customers.

If that's a problem, upgrading to Avira Antivirus Pro for PC lifts all these limits, drops the ads and gives you unlimited customer support for $39.99 per device, per year.

Avira's well-designed website does a good job of explaining the differences between its free and commercial products, and if you're happy with Avira Free Antivirus' specs, the product can be downloaded with a click.

Installation is even easier. There's no messing around with custom setup options, no need to register or create an account (although that's an option, later): just agree to Avira's user license and everything is set up within a few seconds.

We tried installing Avira Free Antivirus alongside Avast Free and had no issues at all. Avira didn't demand that we remove Avast first, and the two packages didn't appear to conflict. (There is always the chance of problems when you install two security packages on the same system, but we still prefer the user to have the option to try it.)

The Avira installation isn't the lightest we've seen, with around 1.2GB of files and the addition of seven new background processes. Typical RAM requirements are reasonable at around 150MB, though, and we found no significant performance impact on our test system.

Avira Free Antivirus opens with a simple launcher of its various apps. Antivirus is at the top; Software Updater, Opera Browser, Phantom VPN, System Speedup, Safe Shopping and Privacy Pal are installed as well; and there are several other Avira freebies which you can install and manage from the same launcher (Password Manager, the Home Guard network scanner and some general browser protection tools.)

You can start a Quick Scan from the launcher, but nothing else, so you'll probably want to tap Open to view the actual antivirus interface.

This looks a little cramped, with lots of icons, and buttons, and basic information on your security status. You'll quickly find your way around, though, and it's not difficult to use. For example, you can run a quick scan immediately, or clicking Scan in the left-hand sidebar gives you options to run a full system scan, define a custom scan to check whatever you need, or schedule a scan to run automatically.

Other sidebar icons are on hand to access quarantined files, view system logs, and browse a few settings. Tap most of these icons and a panel pops out with more options, icons, menu items and status information.

Although this looks complicated, there's less power than you might expect, and most of these areas can be safely ignored, forever. For example, clicking Modules displays a menu of six product areas, for instance, but four of these aren't included with Avira Free (Ransomware, Web, Mail, Protection Cloud Plus). And if you click either of the two that are left - Real-Time Protection, Firewall - then all you can do is turn them on or off.

The console is mostly about scanning, then, and that, at least, is very easy to manage. You can run a Quick Scan from the Status screen with a click (this checked our PC in under 50 seconds), while full scans are only a couple of clicks away.

A basic Custom Scan tool includes preset scans to check running processes, the Documents folder, your local drives, removable drives and more. You can also create a new scan of your own, but you're only able to define the drives and folders to be checked. This works, but we prefer Avast Free Antivirus' more flexible approach, where you can combine multiple checks in the same scan (running processes + rootkit scan + removable drives + whatever you like).

Avira Free Antivirus doesn't include the company's full-strength web protection to block malicious links; that's reserved for the commercial Pro version. Avira's Browser Safety and SafeSearch browser extensions offer reasonable protection, though only for Chrome and Firefox, highlighting dangerous results in your search results and blocking access to known malicious sites. If you're not using the extensions, you won't get the same protection, although Avira should still pick up known threats if they attempt to launch.

Elsewhere, the Status and Module screens include a Firewall option, but this isn't as interesting as you might think. Avira Free Antivirus doesn't include a firewall: it just provides another way to configure the Windows firewall and turn it on or off.

Avira's Settings dialog is more of a highlight, and gives you lots of interesting low-level options and tweaks. Many of these are strictly experts-only ('Enable WMI read access', 'Follow symbolic links'), but others are accessible to everyone. You can password-protect specific areas of the program, for instance, choose a custom sound for audio alerts, or decide exactly which situations require an Avira warning.

Once you've finished playing around with the antivirus, heading back to the launcher provides easy installation for many other Avira tools. A few of these are useful – there's a decent Password Manager extension for Firefox and Chrome – but most are little more than ads for other products.

For example, a Software Updater will list outdated software on your PC, but then only give you four updates for free, expecting you to spend $29 a year afterwards. Avast's software updater supports fewer applications but updates them for free.

Avira's Phantom VPN also looks good in theory, with 38 locations worldwide, until you realize it limits you to a feeble 500MB data a month. Again, you'll need to upgrade to make it useful, for example by paying $6.50 a month on the annual plan.

Avira has a solid record for reliability in recent years, with the major testing labs reporting good, though not quite leading-edge accuracy.

AV-Comparatives' last Real-World Protection Test summary report (July to November 2018) tells much the same story. Avira ranks a creditable fourth out of 21 with a 99.8% protection rate, and was only outperformed by Bitdefender, F-Secure and Trend Micro.

AV-Test's December 2018 report showed Avira rating 'only' 99.9% protection for one of the tests, but that was still enough for it to score a full 6/6 rating for Protection, and the package also had no false alarms and a below-average impact on system performance.

SE Labs October - December 2017 Home Anti-Malware Protection report uses a very different scoring method to rank its products, and this saw Avira drop a little down the rankings, though scoring was still acceptable at a mid-range seventh out of 14. (That's better than Avast and F-Secure, two packages we would normally rate highly.)

Put it all together and these testing lab results show that although Avira products don't offer quite the best protection on the market, they're not far behind, and overall, we believe Avira Free Antivirus does a capable job of keeping you safe from harm.

Avira Free Antivirus delivers decent protection, especially for a free product, but Avast Antivirus Free is almost as accurate and gives you more features and options.