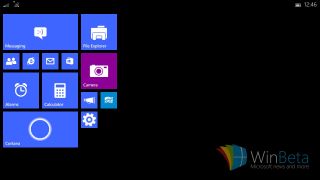 We're finally seeing Microsoft's vision for how Windows 10 will look on phablets.

A new leak of Windows 10 for tablets shows how Microsoft is combining its mobile DNA from Windows 10 for phones with its full Windows 10 operating system for laptops and desktops. After having announced that tablets with a display size smaller than eight inches will see a different version of Windows 10 at launch, we're starting to see how that version will look.

Leaked screenshots obtained by WinBeta show an early build of Windows 10 for small tablets with a tiled home screen. Unlike the traditional Windows 10 preview builds we're seeing, this version won't have a desktop mode and will not be able to run Win32 apps.

This makes Windows 10 for smaller touchscreen devices similar to Windows for phones and Windows RT. Likely, this variant of the Windows 10 OS will be suitable for large phones, phablets, and smaller tablets.

This build for small tablets will be able to run Universal apps, which will scale across different screen sizes for Windows 10. The build was compiled in March, and it's unclear if it will be ready in time for Microsoft's upcoming Build conference at the end of the month.

Similar to how the iPad is able to scale up universal iOS apps to deliver extra value to users, the Universal apps for small tablets can show information with multiple panes.

"Apps like Calculator and Voice Recorder take advantage of the extra real estate, displaying the apps as if they were desktop apps instead of phone apps," WinBeta said.

In one screenshot, the new File Explorer app shows a tree displaying a hierarchy of your folders on the left pane, and tapping on a selection on the left pane would display the content on the folder in the right pane.

Businesses that rely on Win32 apps or specialized desktop programs likely won't welcome the change that Microsoft is ushering in with Windows 10. Prior to the change, 7- and 8-inch tablets that ship with Windows 8 or Windows 8.1 aren't restricted solely to Universal apps and could run legacy Win32 apps.

However, given that legacy apps aren't optimized for touch, the experience of using Win32 programs on a small screen is compromised. While users will have access to full legacy programs, it will be hard to interact with these apps given the smaller buttons that aren't designed for a touch-based user experience.

A new era for Windows phablets

The move, however, makes Windows 10 more practical for phablet owners. Currently, apps on mobile phones like the 6-inch Nokia Lumia 1520 appear exactly as they do on smaller phones. However, the change will allow Universal apps to scale and potentially, when the Lumia 1520 is rotated, Windows 10 could potentially display a two-pane view to take advantage of the larger screen real estate and higher screen resolution on that device.

This is similar to how apps appear on the larger iPhone 6 Plus. In landscape mode, apps optimized for this phone will display more information. On the smaller iPhone 6, apps will not display a two-pane view as the device lacks the screen real estate.