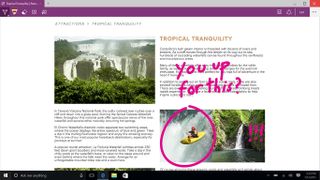 Microsoft is still working on its Edge browser

Microsoft's Edge has been a work in progress even after the launch of the browser with Windows 10, but one of the biggest missing pieces of the puzzle – extensions that allow you to customise the browser as you see fit – could be about to arrive.

The good news is that Windows Central has reported on a Microsoft web page showing off available extensions for preview, that was evidently errantly posted too early – as ever with these cases, the page was swiftly pulled, but the Twitter user who had originally seen this (WalkingCat) grabbed a screenshot before that happened.

The page announced a pair of available Edge extensions for Pinterest and Reddit, with the former being a Pin It Button, and the latter a suite of enhancements for browsing Reddit more effectively.

In the various bits of spiel on the page, Microsoft also notes that "more extensions are on their way".

Previous reports have pointed to extensions not arriving until next year, so hopefully this accidental leak means we will see them very early next year – and perhaps even in preview later this month?

As for these particular extensions, according to WalkingCat, they are pretty much directly ported from Chrome with only a few minor changes. The good news on that front is that at least it should be pretty easy to get a shed-load of extensions across when they finally come to Edge.

When the extensions do go live, Microsoft may well find a jump in user numbers for Edge, as a fair number of people seem to have been waiting for this capability before making a switch. We've used Edge on our Windows 10 machine, and it seems to run pretty smoothly indeed…