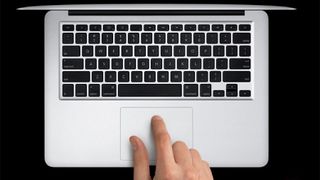 One touch may be all it takes

With all the feature sharing going on between Mac and iOS, it's not hard to imagine Apple might one day allow Touch ID to unlock notebooks or even desktop systems, but could it be coming sooner than we think?

An Apple-centric blog out of Taiwan called AppleCorner (via AppleInsider) seems to think so, and today cited sources straight out of Cupertino's Asian supply chain as potential evidence.

Already widely considered a modern convenience by iPhone 6 and iPad Air 2 owners, Touch ID is the biometric security option that allows access to late-model devices simply by placing the proper finger over a home button equipped with the proper sensor.

The feature, first introduced with the iPhone 5S back in 2013, is a crucial component of Apple Pay, the contactless payment method that shipped with an update to iOS 8.1 last fall - and one many Mac owners are hoping will eventually make its way to the desktop as well.

Touch of a finger

According to Tuesday's report from Taiwan, Touch ID could first make a splash on Apple's long-rumored 12-inch MacBook Air, a notebook pundits expect to ditch most of the traditional hardware ports, while adding Retina Display to the mix.

The svelte laptop is also said to include a Touch ID sensor placed conveniently above the trackpad, not unlike the SecurePad biometric functionality Synaptics plans to implement into PC notebooks with the backing of an alliance that includes Visa, MasterCard and PayPal.

Not in the market for a new MacBook Air? The same report also claims Apple is planning to equip its popular Magic Mouse and Magic Trackpad peripherals with Touch ID as well, bringing the functionality to desktop systems like iMac, Mac mini and Mac Pro.

Until we see further evidence that suggests Touch ID on the Mac will become a reality, we'll keep this report squarely in the "grain of salt" rumor category, although it's worth noting AppleCorner accurately leaked parts for the iPad Air 2 ahead of Apple's official unveiling last year.