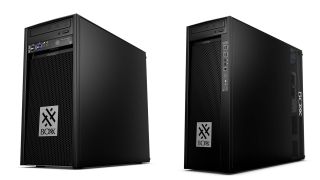 BOXX claims the APEXX 2 3402 and APEXX 4 7402 workstations are optimized for single- and multi-threaded tasks, and the 33GHz aggregate frequency will lead to faster rendering and simulation.

"For users whose workflows require both high frequency and multiple cores, the dilemma has always been that with an increase in cores, a decrease in frequency follows," Shoaib Mohammad, BOXX VP of Marketing and Business Development, said in a statement.

Even though Intel's Core i7 processors ship with clock speeds up to 3GHz, BOXX claims that its workstations can safely maintain the 4.15GHz overclocked speeds "throughout the life of their warranty."

BOXX says that its benchmarking reveals that the eight-core systems outperform more expensive 10-core Xeon-based machines thanks to the overclocking advantage.

"The result is vastly improved viewport performance (panning, zooming, and manipulating 3D objects), significantly faster opening/closing of assemblies, and quicker rebuilds - single-threaded tasks bound by the frequency of the processor, not the number of cores or GPUs," BOXX said of the performance of the APEXX workstations.