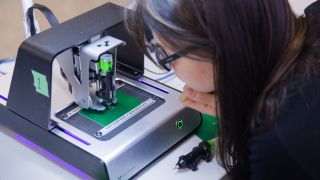 The Voltera V-One, an innovative machine which can print prototype circuit boards in mere minutes, has been declared the international winner of the James Dyson Award for 2015.

The four engineering students behind the device, from the University of Waterloo in Canada, have scooped £30,000 (around $45,000, AU$65,000) in order to further develop their invention.

The Voltera V-One is about the same size as a laptop and is described as similar in many ways to a traditional desktop 3D printer. The V-One uses conductive and insulating inks to swiftly create a two-layer printed circuit board, and is also capable of dispensing solder to attach individual components to the board.

It means that engineers or inventors can quickly produce PCBs, going from design file to finished prototype in minutes, a far easier process than sending said designs away to a third-party factory for printing.

Jesus Zozaya, a co-founder of the project, commented: "We're at a critical point with Voltera. Our parts are now being manufactured and we are about to begin a new wave of testing in our lab. The £30,000 we've been awarded as winners of the James Dyson Award will help us to ramp up production and enhance testing."

Shipping of the first batch of the V-One should have kicked off about now, although the second batch has slipped from its target date of January 2016 thanks to supply chain issues. There is no firm date for batch two yet according to the latest update on the Kickstarter page, though hopefully it will be early 2016.