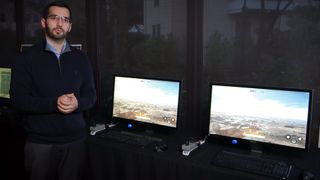 AMD clearly has high hopes to make 2016 a big year, what with the prospect of the launch of new Zen processors, and Polaris-based GPUs – the latter of which the company has spilled some details about over at CES.

Polaris is built on 14nm FinFET technology and promises graphics processors which deliver not just smooth frame rates – including driving heavyweight VR apps – but also what AMD describes as a "generational jump" in terms of power efficiency.

Indeed, AMD is claiming that Polaris will deliver its gaming chops with 61% less power usage than rival GPUs (i.e. Nvidia), and that's particularly good news for those who enjoy gaming on the move with a laptop.

(This particular percentage was pulled from a Star Wars: Battlefront head-to-head demo organised by AMD – pictured above – running the game at 1080p, medium settings and 60 fps, in which Polaris used 86W compared to a GeForce GTX 950 which drew 140W).

This means gaming notebooks will be able to be built much thinner, and the chunkier ones will have a hell of a lot more horsepower under their desktop-replacement-bonnets.

And it's hardly bad news for desktop PCs in terms of PSU requirements, electricity bills, cooling and so forth, either.

Polaris boasts AMD's fourth-generation Graphics Core Next architecture and supports HDMI 2.0a along with DisplayPort 1.3, not to mention 4K h.265 encoding and decoding.

Polaris GPUs are expected to become available by the midpoint of 2016, so hopefully by June with any luck.

And what does the future hold beyond this coming year? AMD reckons that its mobile processors will be 25 times more power efficient by the year 2020.