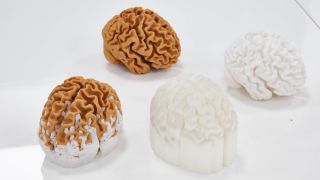 Ricoh has partnered up with Alzheimer’s Research UK in an effort to help people better understand the diseases that cause dementia, while using 3D printing to visibly illustrate the effects of Alzheimer’s on the brain.

This is all part of ‘Dementia Uncovered’, an awareness campaign that highlights the various diseases which can cause dementia and the way they affect sufferers. This campaign includes a number of short films highlighting the experiences of people who are living with different forms of dementia, as well as videos documenting the progress of the ongoing research for a cure.

A previous film – which featured Simon Pegg – showed how Ricoh’s 3D printing tech can produce models to visibly show the effects of Alzheimer’s on the brain, as we mentioned at the outset.

The idea is that doctors could use these kind of 3D-printed models to show patients exactly what’s going on with their brain, so they can better understand the disease (which shrinks the brain four times as fast as the normal rate of healthy ageing).

And the broader hope is to challenge a number of misconceptions about dementia, and make it clear that while Alzheimer’s is the most common cause of dementia, there are other causes with far lower profiles (such as vascular dementia or dementia with Lewy Bodies).

Ian Wilson, who is CEO of Alzheimer’s Research UK, commented: “We are delighted to be working with Ricoh on this important campaign once again. We’re incredibly grateful to the people who shared their experiences to help create such powerful films, which show that dementia is about much more than memory loss.

“This latest chapter of Dementia Uncovered also underscores the commitment and dedication of the researchers whose work is so crucial. Dementia research is making progress and with support from the public and companies like Ricoh, we can make breakthroughs possible.”