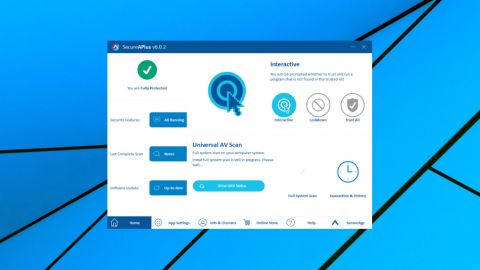 SecureAPlus Lite offers some handy ways to help keep your PC malware-free, but beware, this isn't some 'set and forget' app-- you'll need real security knowledge and experience to get the best out of it.

SecureAPlus is an interesting freemium security tool which can extend your existing antivirus (or just Windows Defender, if you prefer) with multiple extra layers of protection.

And even if some brand-new malware manages to penetrate both these protections, SecureAPlus claims that its SecureAge APEX engines' use of artificial intelligence may enable it to spot and block the threat.

SecureAPlus Lite gets you all the key features we've described, for free, though with some limits.

In particular, the Universal Antivirus is available when running a full system scan, but doesn't offer real-time protection. That's potentially a big deal if you're running the package stand-alone, though not so much if you also have another antivirus.

If you run into any problems, it may take a while to get any response from support. The team only works 9am-5pm Singapore time, Monday to Friday, and suggests replies might take up to 24 hours. (Add up to a further 48 hours if you're unlucky enough to have an issue at the weekend.)

SecureAPlus Essentials extends the package with real-time scanning with Universal Antivirus. It's vastly more configurable, in some very important ways (you're able to adjust the sensitivity of the APEX engine, for instance), and adds support for Windows Server.

Essentials is priced at $20 for a one year, one device license. This drops to $12 on the three-year plan, and only $8 per device year if you're covering five devices.

SecureAPlus Pro goes further with protection against memory injection attacks, the ability to customize security policies to help you manage multiple PCs, email alerts to infections, many advanced configuration options, and an option to replace its ClamAV offline antivirus with an Avira engine.

SecureAPlus Pro looks a little expensive at $30 for a one year, one device license, but again, there are significant discounts as you add more PCs and years. For example, a single device, three-year license is an effective $18 per device year, and covering 5 devices for three years cuts that to $12.

Unconvinced? No problem, installing SecureAPlus Lite gets you a 90-day trial build of the Pro edition for free, no credit card or other details required.

SecureAPlus installed easily on our test system, then, without asking for permission, immediately launched into a full system scan, checking executables and building its whitelists.

Normally we prefer antivirus apps to give us a little more control over what's happening, but SecureAPlus don't hog too many system resources. It grabbed a single CPU core and managed around 10% disk utilization on our test system, enabling us to continue using it for other tasks.

At the end of the process, SecureAPlus informed us that it hadn't found any threats on our computer. Good news, right?

Well, not entirely. When we tapped the Scan button immediately afterwards, SecureAPlus warned us that its 12 cloud antivirus engines had found up to 32 threats.

If you think 32 sounds like a lot, you'd be right, but that's a natural consequence of using multiple antivirus engines. You'll detect threats with one engine that another might miss, but you'll get extra false alarms, too.

SecureAPlus tries to address this in its interface by warning that 'if the file is detected by only 1 AV engine, there is a high chance that it is not a virus.'  That ruled out most of the items on our list, although 13 were still highlighted by two or three engines.

What happened next was up to us. We could take the safety-first approach of removing everything on the list. Or experienced users could browse the threats, check the engines which had highlighted them, and the threat names. (Sometimes these might include terms like 'hacktool', 'adware' or PUA, 'potential unwanted application', indicating that although the files may have some security risks, they're not ransomware or any other kind of deadly threat.)

Windows experts could get some value out of this, as they'll be able to quickly scan the list and separate legitimate tools which are often falsely flagged (technical utilities from providers like NirSoft, for instance), from more obscure files which really could be a potential threat.

Everyone else will most likely be a little confused, as they'll find it far more difficult to separate safe and potentially dangerous apps. If they're presented with ten or more threats, we suspect most will take the same action for most of these - delete, quarantine or ignore permanently - just to save time.

You could ignore the alerts for now, close the scan window and carry on as before, although we noticed an odd inconsistency. Some of the files listed as threats were now blocked from running, as we would expect, but we could launch others without any warnings.

To make this worse, although the SecureAPlus website advertises itself as running alongside other antiviruses, real life isn't always as simple. In particular, if you're using Windows Defender on Windows 10, it'll probably have turned itself off after SecureAPlus is installed. A SecureAPlus support page explains how to fix this, but it's not an obvious process (you must download and apply a .REG file), and unless you check, you may not even realize Windows Defender is turned off.

SecureAPlus is an object lesson in how not to design an application interface. Controls aren't aligned, they have inconsistent styles, their purpose isn't obvious (graphic, label, button?), there's no clear focus for your attention.

The end result looks like the developer came up with four dashboard designs, intending them to choose one, but management decided to cram them all into the same panel.

Much of the interface is focused on your system status. You're able to view your protection level, the features you have active, whether there are unresolved threats.

SecureAPlus Lite doesn't offer real-time protection, and so files won't be detected as they're saved to your drives.

The Full System Scan is faster than it sounds, though, uploading new file hashes to SecureAPlus' cloud engines for analysis. As it's not scanning your entire system each time, the process is very fast - sometimes as low as 30 seconds - and you're then able to view the results.

As we discussed above, you're able to check the engines which identified any threat, and the threat name, before deciding to delete, quarantine or ignore the file. All options work as advertised, but figuring out which is best takes a while, and isn't always obvious.

SecureAPlus can operate in one of three whitelisting modes. 'Trust All' enables running all files without issue; 'Lockdown' only supports running trusted files, and 'Interactive' - the default - asks you what to do whenever new files are launched.

When we launched an unknown application, SecureAPlus warned us that its process was creating 'a new executable or script file' and asked if we should set the process as a 'trusted installer' or a 'restricted application.'

Treating a process as a 'trusted installer' means all new files it creates will automatically be trusted, a powerful privilege.

Some processes may be trustworthy themselves, but be capable of launching malicious programs (Google Chrome, Windows Explorer.) These can be set as restricted applications, ensuring anything they created won't necessarily be trusted. (Although they might be, if their digital certificate appears in SecureAPlus Trusted Certificate list. Complicated, isn't it?)

If you know what you're doing, having this level of control will be very helpful.

Not-so-technical types might be confused by SecureAPlus' alerts, though. And if they're regularly hassled with this kind of prompt, it could be tempting to start clicking 'Yes' each time, without really paying attention.

There's documentation online, but its information is spread across multiple pages, and not always clearly described (the text doesn't appear to be written by a native English speaker.) Again, experts will figure it out, but regular users might struggle. If you're curious, take a look at the support site, see if you think it has the information you need.

SecureAPlus APEX engine isn't regularly assessed by the independent testing labs, which makes it difficult to get a clear picture of how effective it might be.

The engine was added to VirusTotal in May 2019, though, which is a good indication that the company knows what it's doing.

That may not sound great, especially when you see the top products hitting 100% detection rates in AV-Comparatives' Real-World Protection Tests, but keep in mind that those rates are achieved from multiple layers of protection: URL filtering, file signature checks, behavior monitoring and more. Meanwhile, the 86.8% score is for APEX alone, and even the free SecureAPlus gives you more layers than that.

We followed up AV-Comparatives' report by carrying out some small-scale tests of its own.

After running multiple legitimate but little-known applications, we found it raised a marginally above-average number of false positives.

When we ran our regular ransomware simulator, SecureAPlus only raised its standard 'would you like to treat the process as a trusted installer?' whitelisting screen. Meanwhile, our threat was busily encrypting thousands of files, without SecureAPlus apparently noticing (a handy reminder that the package should be run alongside a regular antivirus, not as an alternative.)

SecureAPlus did better at alerting us to attempts by malware to infect our system, but as we've discussed, the alerts aren't always obvious, and it takes some expertise to get the most from the tool.

SecureAPlus Lite can deliver a useful layer of extra protection for a PC, alongside a regular antivirus, but it takes some Windows and security experience to set up the program and manage it effectively.