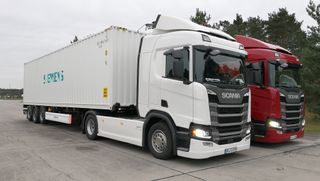 Pick any urban road you can think of and the chances are it’ll be filled with cars. And trucks.

In fact, freight being transported by trucks has increased exponentially over the last few years. So much so that in some locations the situation has resulted in highways that are being strangled with congestion and choked with pollution.

It's not sustainable and something has to change, particularly in light of tough new regulations aimed at reducing CO2 emissions.

Siemens has big plans to help implement that change by joining up the dots for our journeys from A to B. The company reckons that an effective combination of different modes of transport, or intermodal travel chains, could be the secret to persuading people out of their cars. It’s a difficult nut to crack however, with the infamous ‘last mile’ part of the equation – getting to and from your front door - perhaps the trickiest of the lot to solve.

Data is part of the answer. Siemens Mobility has recently spent a day explaining to journalists how its single Mobility as a Service (MaaS) application could be one of the solutions. MaaS allows people to pick, book and pay for the fastest, most efficient option for completing their journey. And to do this it’s also all about having a system that you can use on your phone, one that’s dynamic, fast and friendly for the likes of commuters.

That’s all well and good, but what about all those trucks? As a continuation of the day’s events TechRadar Pro got to head out of Berlin to find out about a potential solution, because there’s another new idea that Siemens has been working on – actually for about 9 years now – that is just about ready to go. Welcome congestion-busters to the eHighway.

At a remote and very cold disused Cold War military base, not far from the border with Poland, the company has adapted a section of old runway and turned it into a highway that supplies hybrid trucks with electricity. The supply comes from an overhead line via a concertina-like pantograph on the top of the cab. Think electric bus or tram and you’ll be along the same lines. The difference with the Siemens Mobility solution is that the idea can be upscaled to create a connected freight network.

It’s needed, as the World Business Council for Sustainable Development (WBCSD) has estimated that the global volume of freight will triple between 2000 and 2050. That will mean a doubling of CO2 without preventative measures being taken. Germany’s Federal Ministry of Transport and Digital Infrastructure says that by electrifying 4,000 kilometres or so of its main freight routes there would be a reduction of 10-12 million tons of CO2. And that’s a lot.

There are plenty of other fun facts surrounding the idea too, which we think makes it sound like a very good idea indeed. First up is the financing of the project: Siemens says that 11% of the expected truck toll revenue would cover the bulk of the cost to implement a 4,000km network. Meanwhile, it is forecasted that 16,000 euros of fuel savings can be achieved by a 40-ton truck driving 100,000km on the eHighway. That’s based on 1 litre of diesel costing 1.25 euros against 0.15 euros per kilowatt hour of electricity.

Siemens own calculations state that, as a result of this eHighway model, there is the potential for 7 million tons of CO2 being saved per year if just 30% of truck traffic on German highways is electrified and supplied with renewables. After all the years of development the system has been honed to work very efficiently too. For example, the pantograph design, which can connect at any highway speed, is said to have an 80% efficiency level when it’s in contact with the overhead lines.

Downsides? Well, if you were to be picky, it would be easy to say that the setup looks a little messy. You’ve got overhead catenary cables, pylons alongside the road and substations along the route too. The good news is that the latter are, in the example we saw, modular and mobile. So they can be moved or taken away entirely if the whole thing proves to be a damp squib. On the point of all the overhead stuff going on a Siemens engineers explained that they’d investigated numerous ways of broaching the issue.

One early angle, which had to be discounted, was to run things under the road surface. Wear and tear of road surfaces and the fact that they need to be maintained would make that route non-viable. Of all the options it is still the overhead cable idea that has proved to be most practical and cost-effective. As for the vehicles themselves then Siemens has worked with a variety of trucks since 2010 and currently has a pantograph design that is pretty compact and suitable for a variety of lorries. It’ll also work happily with hybrid or fully electric HGV types.

While the eHighway idea is just one of many projects that Siemens is developing, including autonomous buses and trains too, traffic management systems are also being seen as vital for keeping us moving in the future. Every second two more people relocate to a city somewhere around the globe says Siemens, so keeping them moving is increasingly difficult. Siemens reports that today's average traffic speed is just 12.5 mph in the busiest urban areas. To improve that scenario it’s increasingly going to be about systems that can manage multiple elements.

Our increasingly universal connectivity means that Siemens new MobilityOS will tap into multiple data collection methods to keep us on the move. In many cases it will be able to pre-empt congestion and send us to our destination via a different route. It’s already happening too, with the company citing success stories in Seattle, where a traffic management system analyses traffic, weather conditions and events going on in the city to produce powerful real-time travel management.

Meanwhile, here in Europe, Berlin is employing a Siemens traffic control system that collects and processes data from eight traffic guidance systems, 22 traffic computers, 2,000 traffic lights and 100 or so video cameras across the city’s 1,500 km of streets. While it’s not a perfect solution, because we still have too many vehicles on the roads, the system is offering hope for people using streets rammed with cars.

And, as for those truck-laden highways that connect our cities then perhaps the eHighway might not mean less HGVs on the roads either. But, it could signal that they're a little bit greener not to mention quieter too.