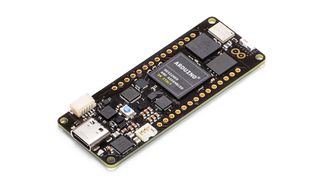 Small and medium businesses may be able to develop IoT platforms at a lower cost than ever thanks to a new release from Arduino.

The open-source hardware maker has take the wraps off a new afforable platfrom that it says can be the breakthrough to get more companies than ever onto the IoT.

The Arduino Portenta H7 packs in everything a start-up or SMB should need to build an IoT-enabled platform and apps.

The Portenta H7 is powered by a dual-core set-up that pairs ARM's 32-bit Cortex-M7 and M4 chips, and features connectivity modules for Wi-Fi, LTE and Bluetooth Low Energy, as well as Narrowband IoT, USB-C and an SD card connector.

This means it consumer very little power, allowing for the design and building of industrial apps that need to run for long periods of time, with power supplied by a 700mAh single-cell battery. The device is able to operate in temperatures ranging from -10 °C to +55 °C, with the non-wireless model able to take this to -40 °C to +85 °C

On the software side, the Portenta H7 will support Ardunio code and run Arm’s Mbed OS, but also feature support for Python and JavaScript applications, including the likes of TensorFlow Lite.

"The combination of Mbed OS with Cortex-M IP in the new Arduino Portenta Family will enable Arduino’s millions of developers to securely and easily develop and deploy IoT devices from prototypes through to production.”

The Portenta H7 is available now for beta testers, with general availability scheduled for February 2020.