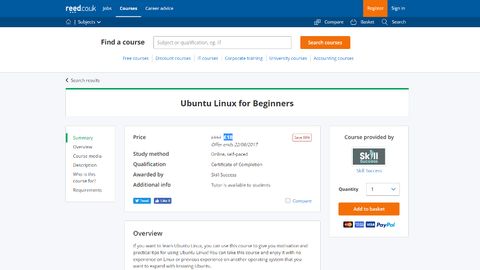 There’s no disputing that this course is a superb value proposition, but it’s quite complex in places.

Reed.co.uk is best known as a recruitment website, but it also hosts a number of online courses including Ubuntu Linux for Beginners. These are in fact designed by third parties, and this course actually comes from the good people at Skill Success – the reason we recommend subscribing via Reed is that the course is currently available for £18 ($23), which is a huge 89% discount on the usual price of £157 (around $200).

Ubuntu Linux for Beginners is available as a series of video lectures, allowing you to learn at your own pace. However, it’s worth noting that the Skill Success course page seems a little confused over who exactly is teaching it.

The introduction section claims that the instructor 'Nick' has over 10 years’ experience as a Linux administrator and developer. The 'About the Instructor' section on the page claims it's a man named Jerry Banfield who has a Bachelors and Masters Degree in unspecified subjects.

But any vagueness concerning who is teaching the course isn’t that big a deal when you consider that there is a no-quibble 30-day money-back guarantee, should you be unsatisfied with the quality of the course.

The training itself is divided into 11 topics. The first topic focuses on getting started with Ubuntu Linux, while discussing other distributions. This is important for newcomers, who may have heard of other types of Linux and might be unsure about why the course is focusing on Ubuntu specifically.

Having reassured trainees that Ubuntu is the best Linux distro for beginners, the following topic covers the specifics of installing VirtualBox and setting up a virtual machine. This section also covers downloading an ISO image of Ubuntu and installing it within VirtualBox.

The following section allows trainees to tweak their initial setup. Unlike other courses we've reviewed, the instructor covers installing ‘Guest Additions’ in VirtualBox so that your Ubuntu virtual machine supports features such as reading from USB devices and full-screen mode. You'll also receive some handy tips on customising your desktop by installing the Unity tweaking tool, although this will soon be obsolete in future versions of Ubuntu due to Canonical's decision to switch back to the Gnome desktop environment.

The course then goes on to explain how to install Ubuntu alongside your current Windows installation. This can be tricky to set up correctly on certain machines, but will generally result in better performance than a virtual machine, so it's good to know the instructor is presenting you with a choice in terms of setup.

The fifth topic is all about getting started with the Linux command line. This is a bold choice of subject to introduce immediately to new users, but the explanations are clear. Trainees are introduced to a few simple commands as well as learning how to invoke administrative privileges from within the Linux terminal.

This section also covers how to install new software, a subject which often isn’t covered early on in the courses offered by rival training providers. It makes perfect sense to discuss this earlier rather than later, however, given that this is one of the most common tasks you'll perform when setting up a new system. Furthermore, the instructor gives a brief summary of software repositories as well as looking at how to install third-party apps.

The following section allows you to learn about some of the more advanced commands available in the Terminal such as using 'grep' and 'gind' as well as scheduling tasks via crontabs.

The learning curve continues in the seventh topic, which teaches how to ready your Ubuntu system to create apps. This includes downloading the Java IDE (Integrated Development Environment) 'Eclipse' and the Python IDE 'PyCharm'. This section also provides an introduction to Github as well as discussing how to set up your own repository.

There's even an extensive tutorial on using Meteor to develop web apps, as well as installing software such as Apache to set up your own server. The next section takes this a step further by discussing how to deploy a Meteor app on your own web server, installing and configuring PHP, as well as setting up a WordPress installation. There's also a brief discussion of some of the practical applications of Python.

The following sections cover managing users and file permissions, a must for any admin, as well as some common network administration tools such as 'netstat' and 'traceroute', presumably so you can check all is well with your new server.

The final topic covers using SSH to connect to a remote host, as well as setting up an SSH host on your local machine. This is one of the few sections that seems out of order as it could easily have been merged into the subject matter regarding setting up your own server or network administration.

At the time of writing, with its current discounted rate via Reed, this course offers excellent value-for-money, although the reduced rate is not always available (that said, the hefty discounts do seem to be recurring affairs).

The subject matter is detailed and explained well, but one can't help wonder if at times the level of difficulty is too high for beginners. Ubuntu is available as both a desktop and a server edition, and it’s clear that Skill Success has tried to strike a middle ground by mentioning how to set up a system and then detailing how to install your own server.

The section on developer tools is particularly perplexing as having helped you install both Eclipse and PyCharm, these tools are not mentioned again – rather there’s an extensive tutorial on designing web apps with Meteor. The Meteor platform seems to have been selected to integrate with the web server, but Python would have been a much more sensible choice to help people get started with programming in Ubuntu.

The server section similarly details an array of wonderful projects you can do with your new Ubuntu server such as setting up a database or WordPress site, but again, it might have been better to focus on one simpler project, as opposed to trying to detail everything Ubuntu can do.

That said, you don't have to progress in a linear way through the course, so if some sections are too complex and/or of no use, you can always skip ahead, then return to them later. Each section is also explained in a clear manner, so that’s certainly ideal for those who are new to Linux.