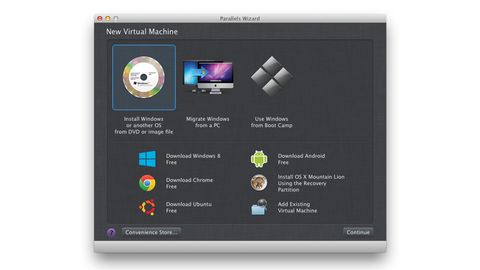 Going head to head with VMWare Fusion 5 is Parallels Desktop 8. This latest version boasts speed improvements and other enhancements such as support for 32GB of RAM.

As with VMWare Fusion 5 there aren't many big perks over the previous version. Getting started with virtualisation can be a confusing minefield of operating system jargon and instructions. Here Parallels scores highly on our ease-of-use scale.

Getting started with your virtual operating system is easy. Even if you've not downloaded the software, Parallels will go and fetch the right thing, making the whole process simple. Within seconds you can be on your way to installing Ubuntu or even Android, you can get OS X Lion from your rescue partition and naturally, a host of Windows options.

Once you've chosen what operating system you'd like Parallels to run, the installation times are impressive too. We had the developer preview of Windows 8 installed and running in about 25 minutes.

For Mac users who want to play Windows games on their Macs, virtualisation software offers the perfect workaround and Parallels is good in this area too. There's no denying that game graphics suffer in comparison to a dedicated games rig, but gameplay was smooth.

Naturally, most processor- and graphics-intensive games will push your Mac a bit hard, but there are plenty of other titles that work fine. Parallels is speedy enough, though we have to admit that it seemed to be a bit more processor-hungry than Fusion 5 in everyday use. The software seemed to slow down OS X operations more often, but an extra 5 seconds for an app to open is hardly the end of the world.

In many ways being just as good as VMWare Fusion is a bit of a problem for Parallels, given that it's more expensive. At £65, Parallels doesn't give a host of extra features or a huge increase in performance over the £40 that VMWare Fusion costs you.

All that being said, Parallels is a great product - it works well and given the complexity of what it's performing, operates at impressive speeds. For upgraders, the list of improved features is similar to Fusion 5 in that there aren't many. If you must have it then you'll not be disappointed, but you're not getting much either.