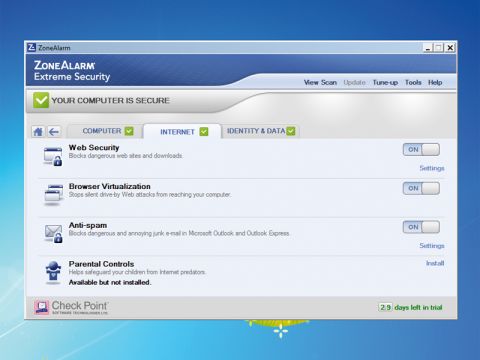 ZoneAlarm made its name in firewalls, and the one that comes with Extreme Security 2012 is extremely accomplished.

There seem to be as many options for the firewall as other internet security packages have for their entire suite. As we delved into advanced options of the firewall, we were very impressed with the level of control offered.

Even without changing any of the default settings of the firewall, we found that we weren't constantly interrupted by popups asking for permission to allow programs though – an annoyance common with badly configured firewalls.

ZoneAlarm Extreme Security comes with lots of additional features, and most of them have a heavy emphasis on controlling what information is sent and received by the PC its installed on.

One of the things we liked the most when using this software was that the default settings are well configured, so if you aren't keen on tweaking some of the more complicated options you can leave them and your PC will still be well protected.

The application control settings are particularly powerful, and let you control which programs and services on your PC can access parts of our network.

The browser virtualisation feature works in a similar way to Panda Internet Security 2012's SafeBrowser. It creates a virtual space to browse the web, keeping it separate from the rest of the PC and displaying false ports to trick hackers.

The antivirus scanning, parental controls, online storage and anti-spam features are all welcome, and they work perfectly well, but we feel that they are almost afterthoughts compared to the headline firewall protection.

ZoneAlarm Extreme Security 2012 is a powerful and sometimes confusing security suite. If you want user-friendly interfaces, you're better off with Norton Internet Security 2011, but if you want full control over your home network, get this.