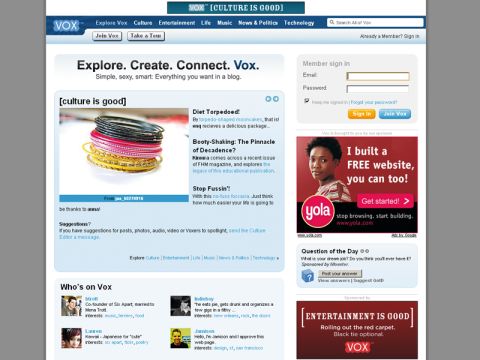 Vox is brought to you by Six Apart, the folks who developed the very well respected MovableType blog software and TypePad hosted blogging service.

With that pedigree you'd expect a slick and friendly system for professional level blogging. You'd be half-right.

Vox is certainly good looking and easy to use, with an emphasis on community.

Professional, though? We wouldn't recommend you replace your current CMS with it.

In use, Vox feels like an evolution of LiveJournal (which Six Apart briefly owned). There's more functionality – with connectivity to Facebook and the like – but it feels less powerful.

The site favours social Vox networking over blogging, which may be where the fault lies.

Vox doesn't know whether it wants to be a blog platform or try to compete directly with MySpace. Despite this, the blogging features are reasonably solid.

Vox's themes are reminiscent of MovableType, which is good, but you can't edit styles directly, add your own domain or get rid of the extraneous navigation that Vox puts on every page.