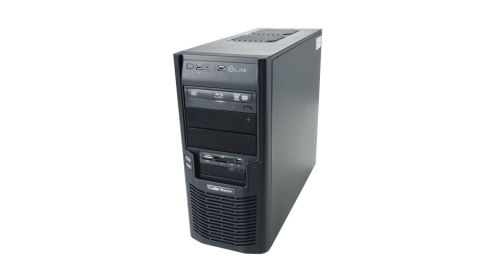 There's no denying that the traditional desktop PC as we know it is facing an uncertain future. Its market share is being eroded by tablet PCs, laptops and even smartphones as more of our traditional computing tasks are going mobile.

In the face of these pressures the common desktop PC has two stark options: keep doing what it does best - offering raw power, stability and upgrade options - or completely reinventing itself. Both options are as risky as the other. The second option of reinvention is covered by the brand new Chromebox.

The first option is ably demonstrated by the Vibox Flame-X. It's a familiar desktop PC that's pack with some of the latest and most powerful technology. It offers speed and power that mobile PCs can only dream of at the moment, with a price tag that they could never match.

Running a new Intel Core i5 3570K Ivy Bridge processor and 8GB of Crucial Ballistix 1333Mhz DDR3 RAM, this is certainly a very powerful computer, able to run day-to-day tasks incredibly quickly.
But is it the huge leap in technology that the desktop PC needs?

Whilst the Intel Core i5 3570K - and Ivy Bridge processors in general - are undoubtedly great processors, but as an upgrade from the previous generation's Sandy Bridge architecture, they're a bit of a disappointment, as the huge advance in performance we'd have hoped for just isn't there. Instead it is more of an incremental step up.

The CoolerMaster chassis the Vibox Flame-X isn't the most attractive PC case in the world, but it's small, does the job and has two front-mounted USB 2.0 ports, along with microphone and headphone jacks.

Though positioned as a more straight-laced home desktop PC rather than an all-powerful gaming machine (which Vibox also do), the Flame-X's chassis still has blue LEDs and Perspex window, which will look out of place in a home office.

The system is solidly built and well-put together. It was thoroughly tested before being dispatched, and with Windows 7 Home Premium installed it has a refreshing lack of preinstalled bloatware that you get on some pre-built systems. Overall a robust and powerful desktop PC.