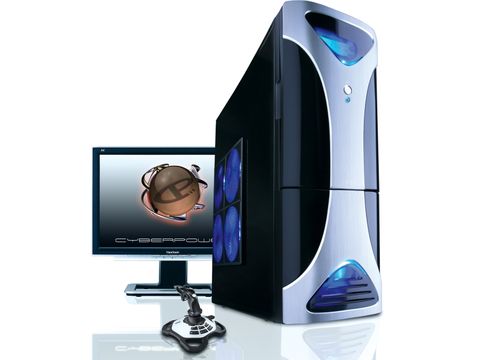 One of the best all-inclusive gaming packages on the market, and Vista ready

Time was, if you wanted high-end gear in an off-the-peg unit, you paid upwards of £3,000. Well, this rig flicks the bird to that concept. No PC we've ever tested has run games as well as this one. Fact.

So fire us for stating the obvious here but games are important to us. Really important. It's why we do this; the endless benchmarking, the ceaseless hunt for the best kit, the tweakery... we do it all because we love games, and we want them to look better and run faster, plain and simple.

And when all that good stuff comes in a single package, it's a beautiful, beautiful thing. Partly, this is down to Cyberpower's choice to go simple with the extras. You get a reliable 19-inch Viewsonic panel, a basic wired desktop set and a set of Creative 7.1 speakers.

The few extra quid saved here goes into the very best internal components money can buy. We're still reeling here from the cutting-edge spec-list: quadcore CPU, Corsair Dominator memory, GeForce 8800GTX, and an NFORCE 680SLI motherboard. As if that wasn't enough, there's even a pair of WD Raptor hard drives in RAID configuration. And then there's that gorgeous custom paint-job. Surely this is some kind of joke?

But no. And neither is the performance. At the panel's 1,280x1,024 optimal resolution, you get 64FPS in Oblivion with all the shiny wound up, 12,119 in 3DMark06, and a stammerinducing 194FPS in Half-Life 2: Episode 1. This rig reduces games that have been available for less than a year to chum, and is the most Vista-ready PC we've met, given its DX10-compatible card.

I only wish I'd taken a photo of James' face when he installed the immensely demanding ArmA: Armed Assault beta code on it. "No PC has ever played it this smoothly" he stammered, wearing an expression like Father Christmas, the tooth fairy and Kylie had just sprung him with a group hug. Bless him!