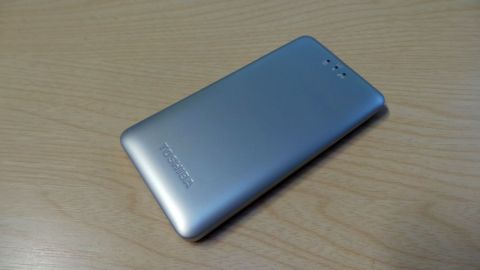 Toshiba's first attempt at a wireless SSD device is near perfect. The drive genuinely impresses with its simplicity, build and performance. It is expensive but then you get what you pay for.

From time to time, a product that appears to be promising lands on your desk, but ultimately ends up being a bit of a disappointment. Toshiba's Canvio AeroMobile wireless portable SSD, which has a 128GB capacity, may sadly fall into that category if you're thinking of buying it purely for storage reasons.

Seagate, Samsung and Western Digital have added Wi-Fi to a hard disk drive but none have tried – to our knowledge – to swap a spinning drive for a solid state one.

In theory, doing so makes it lighter, much faster, more resistant to shocks and power efficient; Toshiba claims that it can stream data for up to eight hours. At £110 from John Lewis (around $168, AU$216), it comes dangerously close to the £1/GB barrier, which is about twice what I'd expect to pay for an SSD of similar capacity.

That said, this gadget combines an SSD with an SD card reader, Wi-Fi capabilities and a battery, and the combination works very well if you're ready to cough up for it.

Our review model was a champagne coloured one with a Toshiba logo stamped on the front and three status lights that indicated, from left to right, charging, Wi-Fi and power. On one side there's an SD card reader and on the top, a micro-B USB 3.0 port, the power button and a reset hole.

You won't be able to charge an additional device as you can with the Buffalo Mini Air 2 drive, though. Along with the drive itself, you also get a USB 3.0 cable, a charger and a black carry pouch.

Additionally, you can download a free app on iOS or Android to access the device remotely and to enable the pass-thru mode which will allow you to access the internet while connected to the Aeromobile.

When it comes to wireless file transfer, the combination of 802.11n and solid state storage helped tremendously. As a media streamer, it was one of the more versatile we tested and managed to play all the media files we threw at it without breaking a sweat. And the fact that up to eight users can connect to it is a definite plus.

Mac users should note that they will need to install the Tuxera NTFS for Mac software that's bundle with the Canvio AeroMobile to get going.