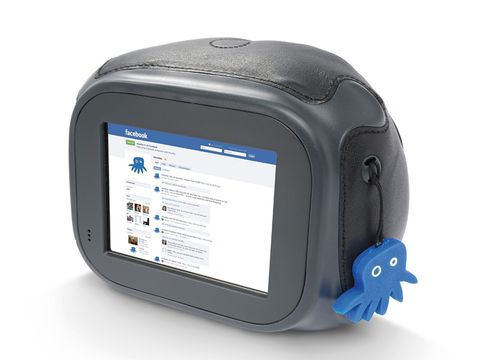 The Chumby Classic struggles to find its niche

The Chumby Classic isn't our favourite gadget of 2010. To begin with, its chunky shape and squishy leather casing make it feel like a Fisher Price toy: My First Web 2.0 Widget Device, perhaps.

Its sheer purposelessness makes it seem like it was bought from a joke shop. And its price, most unforgivably of all, makes it hurt like a swift smack in the face.

At heart, the Chumby is a Wi-Fi internet viewer designed to sit by your bed or in your kitchen. You register your device on the Chumby website, then create your own channels from the 1,500 free widgets available.

It sounds like it should be a sort of cheap and cuddly housebound iPod Touch, but the 320 x 280 resolution touchscreen, clunky interface and slow 12fps refresh rate make reading unpleasant, videos stuttery and games hard to play.

The widget the Chumby website puts the most effort into promoting – the Pandora music streaming service – isn't even available to UK owners due to music licensing problems.

Chumby's creators have chosen to make their widget-creation tools available to the public, and even allowed users to hack the machine's hardware.

The results are some rather unusual widgets, including one where you stroke a Buddha for luck, and one named 'Karen' that plays a looping animation of a girl doing cartwheels in a graveyard. ("It's a strong commentary on the Iraq war. This widget has helped me rediscover my faith," reads one of many positive user reviews.)

But crazy community-designed apps aside, it's just not clear what niche the Chumby is designed to fill. Who actually needs a beige, leather-clad iPod Touch that's tied to a mains power supply?

A simple netbook would perform the same function much better and would cost only a little more.