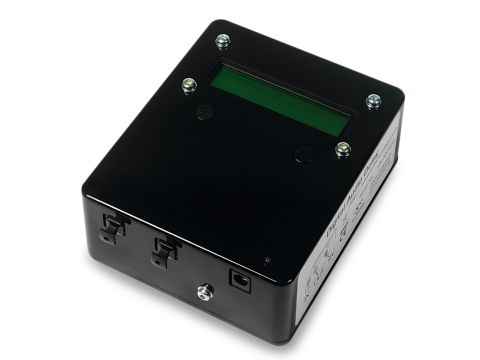 Appearance-wise, the Digital Audio Delay is rather nondescript-looking

A highly useful utility for getting rid of delay

So you've bought that fancy new display you've been drooling over. With that high-quality audio system, you're looking forward to home-cinema nirvana. But something doesn't seem quite right; movies you view seem as if they've been poorly dubbed. So what's going on, and, perhaps more importantly, what can be done about it?

The problem is 'lip-sync' and it's down to the delay times imposed by the complex digital signal-processing now built into many displays. You won't notice it on the TV's audio system (manufacturers compensate for such delays internally) but it's certainly an issue with off-board kit, over which the display manufacturer obviously has no control.

An affordable solution is the rather nondescript-looking Digital Audio Delay from Scottish outfit JS Technology. Standard optical digital inputs and outputs connect to your source (DVD player, set-top box) and amplifier's bitstream input - this item makes no concession to the analogue world.

A pair of buttons increase or decrease the delay time in 5ms increments - the maximum is an ample 340ms - and are adjusted until lip-sync is restored. The current display time is shown on a LCD panel, which also identifies the incoming signal's sampling rate.

The box is compatible with all common digital soundtracks and works extremely well with no deterioration of the audio signal. Both 44.1 (CD) and 48kHz (digital TV/DVD) sample rates are supported. As it stands, delay must be adjusted while watching TV or movies - it's easier if you have the Digital Video Essentials DVD. JS Technology might want to include something similar in the future, or put up a disc image on its website.