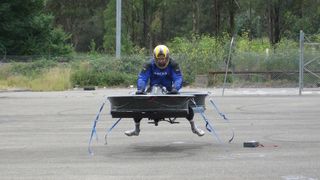 The US Army may have Star Wars on its mind as a new deal was announced between the US Department of Defense and Malloy Aeronautics, developers of a hoverbike.

Described as cheaper and more rugged than a helicopter, the company's Marketing Sales Director Grant Stapleton told Reuters that safety and maneuverability are key advantages of the hoverbike.

The UK-based Malloy Aeronautics will be working with Survice Engineering Company, a defense contractor based in Maryland, to help develop the military-focused crafts.

Service Engineer Mark Butkiewicz explained the US DoDefense is interested in developing the hoverbike as it can support multiple military and humanitarian roles, including transporting supplies and troops, including over difficult terrain, operating in both manned and unmanned operations, along with the ability to operate as a surveillance platform.

"We've been working with Malloy Aeronautics to develop a full-scale version of the scale model in front of me, and the next step is to do additional testing, and then to design and construct prototypes that meet military requirements," Butkiewicz said at the Paris Airshow, where a model of the hoverbike was on display.

You can see more of the hoverbike in the video below: