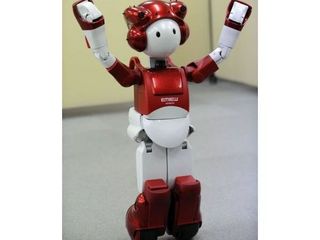 EMIEW, for short, or ""excellent mobility and interactive existence as workmate," for long...

The mini man-like marvel can rollerskate over uneven surfaces, and respond to your voice commands.

EMIEW2 ("excellent mobility and interactive existence as workmate") has spring-loaded shock absorbers in its legs which let it move across bumpy surfaces and ride over wires, a first for these types of robots, claims Hitachi.

"It can control its posture the way humans do when we stabilise ourselves after jumping on inline skates," says Yuji Hosoda, chief researcher at Hitachi's transportation systems department.

EMIEW2 is only 80 centimetres tall and weighs in at 14 kilograms. It has 14 microphones fitted into its helmet that can pick up voice commands over and above extraneous noise.

Hosoda added: "It could also be used for security, such as patrolling and surveillance as it could find a suspicious person hiding in blind spots out of range of fixed security cameras," he said.

"This adorable EMIEW could lead to a new form of surveillance."

It wouldn't make a very good robotic security guard however, despite Hitachi's claims, as it can only move at a maximum 3.7 miles an hour.