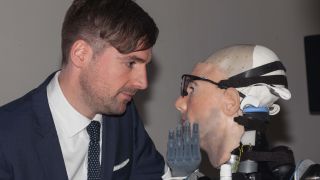 Bertolt Meyer comes eye to eye with his bionic double

A "bionic man" made up of $1 million of prosthetic limbs and organs has been put on show at the Science Museum in London.

Given the name Rex, the bionic man shows off some of the most sophisticated prosthetic limbs and artificial organs in existence. Among the shopping list of futuristic human spare parts used in his creation are artificial organs including a kidney, pancreas, spleen and trachea along with a functioning blood-circulatory system.

Rex was created by a team of roboticists for a Channel 4 TV documentary called How to Build a Bionic Man in order to show how far the technology of replacement body parts has come.

The documentary is presented by Bertolt Meyer, a social psychologist at the University of Zurich, whose face was used as the template for Rex's own.

"One of my personal favorites is the artificial blood that runs through these tubings, because this is made of nanoparticles that are able to bind oxygen and give them off, just like real blood," Meyer said. "What we are close to accomplishing in terms of artificial organs – I find that absolutely mind boggling."

Rex is on show at the Science Museum in London as part the free exhibition "How much of you can be rebuilt?" until March 11.