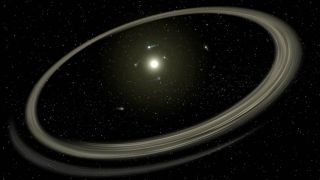 Who wants to go on a road trip?

Welcome to Week in Science, the first in a regular series of science-in-brief roundups from TechRadar. We've got some awesome stories for you this week, so let's get on with it.

Another Earth? - Ever fancied visiting another habitable planet for a holiday? One might be closer than you think. Astronomers have discovered five planets orbiting the closest star beyond our own solar system, Tau Ceti, including a planet within the 'Goldilocks zone'. This planet could be just like Earth, and it's only 12 light years away too. Now all we need is warp drive. [Science]

Saturn shows us her dark side - Not to be beaten in the celestial body popularity stakes this week, Saturn showed us her orbital rings in this simply gorgeous shot of her dark side. The beautiful image was captured by NASA's Cassini space probe as Saturn passed in front of the Sun, illuminating the fragments of ice that make up her rings. Capturing ultraviolet, visible, and infrared light using a wide-angle lens, NASA's Cassini team then stitched the layers together, correcting for colour. Well worth the effort, showing that even the familiar planets close to home still hold wonder. [NASA]

Mind control - Ever wanted to have a third arm? The possibilities would be endless, and science made a giant step forward to making it happen. 53-year-old Jan Scheuermann became the first person in the world to control a robotic arm entirely with her thoughts. Paralysed from the neck down, Scheuermann learned, through the use of neural electrodes implanted in her brain, to control the arm by thought alone. She gained impressive dexterity, practically giving her the same movement capabilities of a real human arm. Perhaps the dream of having many mechanical arms to do your bidding, like Doctor Octavius, isn't so far-fetched after all. [The Lancet]

Sonic slicing - Next time you're headed for the operating theatre, you might be lucky enough to be blasted better by sound alone - no nasty incisions needed. Researchers have managed to use an acoustic lens made of a super-thin layer of carbon nanotubes, known as graphene, and an ultra-thin layer of rubber, to convert a focused laser into a high-powered, super-focused ultrasound beam. The ultra-fine sonic shockwaves can, in theory, blast away blood clots, cancer cells, and other miscreants in the body, completely non-invasively. Say goodbye to scars and pain, and say hello to instant super-targeted treatment - a couple of blasts and you'll be as right as rain. [University of Michigan]

A gene to live forever? - The thought of living forever seems daunting for some, but that's the holy grail of medical research. Couple that with the ability to live cancer-free and you're on to a winner. A gene that allocates the correct number of chromosomes to the right cells during duplication has been found to protect against cancer and slow ageing, when over-produced in mice. Although research is only in elementary stages, it could provide a key target for drugs to either halt, or slow ageing, and prevent cancer in the process. In 20 years we might be able to live forever, if you'd ever really want to. [Science]

A one-two knockout punch for flu - Seasonal flu is a nightmare for everyone. It doesn't just make you super sick, it can actually kill you. The problem is flu mutates and changes every year, like a master of disguise. We have vaccines now, but it's basically a guessing game as to which strain of flu is about to pop up - if the researchers guess wrong that year, you get sick. A new method, which combines traditional flu vaccines with a new type of T-cell-based vaccination, looks to hold the answer. The T-cell-based vaccine helps you recover much faster, whereas the traditional flu vaccine helps stop it taking hold in the first place. The two combined give you a killer one-two punch to knock flu on its head, preventing you from getting sick, and more importantly, from passing it on. We might be finally able to show flu who's boss for once. [New Scientist]