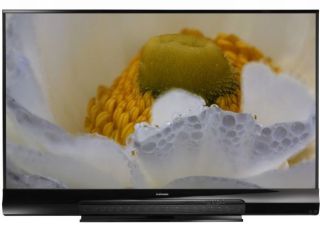 Along with a 92-inch 3D TV that can be used to dominate the living rooms of the wealthy, Mitsubishi will be showing off a mammoth 155-inch OLED display at CES 2011.

155 inches. That's almost four meters of crisp, OLED goodness. It won't be adorning an entire wall of your home, however; this bad boy is intended for advertising and other forms of digital display, probably with a price tag to match.

Mitsubishi itself sold at least one 3.8-metre (150-inch) display last year, but what will make the 155-inch display really impressive is if it consists of one single OLED panel. We suspect that it doesn't, given the manufacturing issues still prevalent in the OLED industry, but we're always ready to be proved wrong.

The OLED behemoth offers super-high contrast and will dwarf the otherwise-enormous 92-inch 3D TV on show.

Before the 92-incher came on the scene, the largest 3D Mitsubishi you could indulge in was and 82in model – we hear those extra 10 inches make all the difference.

Mitsubishi will also be showing off a number of 3D projectors and a mini photo printer at the tech show in Las Vegas.