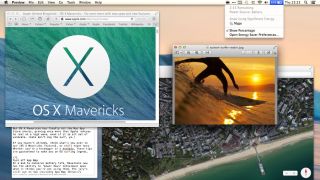 Apple has launched the OS X Beta Seed Program, which lets you catch a sneak-peak of pre-release updates for the first time.

The first version that will be available to the public is OS X 10.9.3, the latest update for Mavericks. The Cupertino, California-based company recently added build 13D45a of the upcoming release, which adds new support for 4K displays and allows 60Mhz output from the Retina MacBook Pro.

Those interested in giving the beta a whirl need to go to the Beta Seed Program website and sign in with their Apple ID. Users must be 18 or over, and the beta is free.

Participants will have to accept the Beta Seed and Confidentiality Agreement, which shows that the beta might be open to the public, but Apple still considers some of the features and functionality of its releases to be under wraps.

Once in, pre-release versions of OS X will be available in the Mac App Store Updates panel.

Of course, this isn't all about getting a first look at new stuff. Apple wants users to provide "quality and usability feedback" in an effort to further improve the operating system.

Previously Apple restricted its beta of OS X releases to developers, so this move marks a major shift in policy.