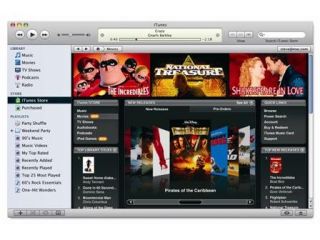 Is the UK iTunes Store soon to be offering movie downloads?

Consumers in the UK, France, Italy and Spain will be able to buy and download full length films and TV shows via Apple iTunes Store as soon as March or April, according to French newspaper Le Figaro .

The claims were made in an article debating what impact Apple offering downloadable films on its iTunes Store would have on the French cinema climate. Films will be available to buy on Apple's online store three to six months after their cinema release, the article alleges.

The claims make sense - if the newly launched Apple TV is to be successful in Europe, there really needs to be some relevant content available, apart from the movie trailers and music videos that are offered currently.

Consumers in the US have of course been able to buy films and TV content on iTunes Store for some time now. Apple TV, which some call an extension of Apple iTunes, is one of the best-selling products on the US iTunes Store at the moment.

Apple UK would not comment on the iTunes rumours.