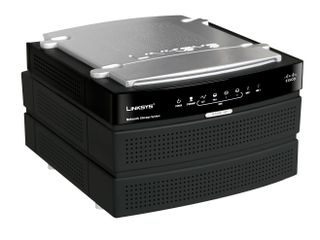 One of the more perplexing trends of this year's IFA is the European announcement of kit first seen at the Las Vegas CES back in January. Linksys is no exception, but here the reason for the delay is somewhat unclear. The £99 NAS200 is just a plain old network storage chassis into which you slot SATA drives of your choosing.

Other manufacturers such as Netgear and D-Link have similar 'caddy' units - Buffalo is one of the only manufacturers to ship all its NAS (Network Attached Storage) models with drives included.

Like Buffalo's LinkStation Live series, the NAS200 can be used as a media server alongside UPnP (Universal Plug and Play) devices.