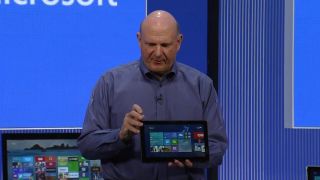 Look for a wash of tinier Windows 8 tablets coming to stores over the next several months, proclaimed Microsoft CEO Steve Ballmer at the company's Build 2013 conference today.

"We're going to see a proliferation of Windows small tablet devices over the course of the next several months," promised Ballmer during the Day 1 keynote.

Microsoft is including its Office software with these Windows 8 tablets, giving the small screen devices a free copy of Office Home and Student 2013.

The company's generous mood continued when Ballmer announced that all Build conference attendees would receive a Acer Iconia W3 tablet (a Surface Pro was later gifted to the developer crowd by Windows head Julie Larson-Green).

"It's the perfect device for a student who wants to do homework and have a little entertainment at the same time," Ballmer said of the fittingly sized 8.1-inch tablet.

Although Microsoft didn't announce a Surface Mini as one of the new smaller tablets, Ballmer did note that small W8 tabs won't be missing from Build.

While Ballmer and a sampling of executives talked specifically about smaller tablets, Ballmer ended the keynote with a more general pronouncement:

Confidence is certainly not lacking with the CEO.