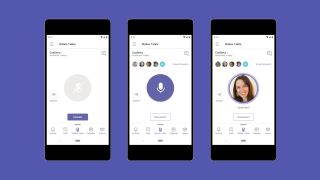 Microsoft has announced that it is adding a new walkie-talkie feature to Microsoft Teams to help secure the communications of firstline workers.

The new feature will be available in preview in the coming months and it will turn smartphones or tablets into a walkie-talkie that can work over either a cellular or wireless connection.

Walkie talkie functionality appears to be quite a sought after feature which is why Microsoft has decided to embed it at the center of the navigation bar inside Teams.

“This functionality, built natively into Teams, reduces the number of devices employees must carry, and lowers costs for IT. Unlike analog devices with unsecure networks, customers no longer have to worry about crosstalk or eavesdropping from outsiders. And since Walkie Talkie functions over Wi-Fi or cellular data, this capability can be used across geographic locations.”

Microsoft will use push-to-talk for Teams' walkie-talkie feature and the software giant promises that it will deliver clear and instant communication over the cloud.