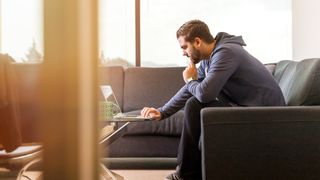 Note: Our best Linux distro for laptops feature has been fully updated. This article was first published in January 2011.

The smart notebook user shouldn't overlook Linux. The question is: which distro should you pick to run on your laptop?

Experienced users might recommend Arch Linux for fast performance, Debian for stability and Ubuntu for its collection of user-friendly, pre-installed apps.

If that's not enough choice to make your head spin, Slackware is also very popular amongst people with older laptops, although it's only really suitable for advanced users.

In this article, we'll look at different usage scenarios that should be familiar to users of portable devices and explore Linux distros that are suitable for these particular cases.

To make everybody's life easier, we've limited this guide to pre-packaged Live Linux distros. We'll also stick to Live installations as much as possible throughout this tour. This is important if you're working on a corporate laptop and can't install software, as you can test drive an OS without special permissions.

Linux is a wonderful platform for gaming, whatever your preferred genre. There's plenty to choose from, including real-time and turn-based strategy titles, puzzle games and first-person shooters.

To get started in the world of Linux gaming, one of the best Live DVDs has to be Fedora Games Spin, which comes as a downloadable 4.1GB ISO you can burn to disc or copy to USB. Log in as the Live system user (no password) and use the Application Finder to browse over 100 games spread across genres as diverse as arcade, adventure and sport.

The concept behind the distribution is boot and play – just pop a USB drive, CD or DVD into your laptop, the distro will boot and you can start gaming. This approach is particularly useful if your laptop has been configured by an overzealous system administrator.

Fedora uses hybrid ISOs which can be booted from DVD or copied to a USB stick. You can use the specialist Fedora Media Writer tool to do this. If you copy the Live install to a USB stick, you can then install extras such as Wine and other games through the Yum Extender app.

Steam and 'Play on Linux' (a gaming-friendly frontend for Wine) can also be installed via the non-free RPM Fusion and the PlayOnLinux RPM repositories respectively. Once installed, just reload Yum, let it update and the packages will be accessible.

Steam for Linux is an official gaming client created by Valve, the people behind Counter Strike and Team Fortress. The client supports hundreds of games such as the Civilization series as well as the original Half Life shooter.

To get started, run a regular version of Linux such as Ubuntu, then follow the instructions on Valve's website to install the client. There is a separate SteamOS based on Debian Linux but this can't be booted into a Live environment, rather it must be installed to a hard drive.

Finally, there's the Ubuntu-based Ultimate Gamers Edition – to download the latest version (5.8), ignore the 'Gamer' link on the website and choose 'Ultimate Edition 5.8'. Choose the Gamers Edition from the Download Links section. This also includes Wine and the PlayOnLinux app for playing Windows games on Linux.

If Windows games are what you're after, you'll also need to download Cedega and CrossOver Games. These tools aren't included in any distribution, but for maximum compatibility it's best to download the latest releases from the developers' original websites.