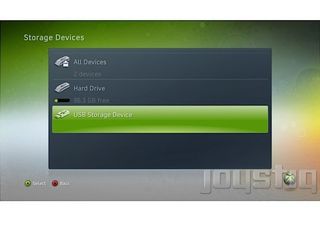 The Xbox 360 could soon support USB mass storage devices for game storage – allowing users to benefit from the proliferation of cheap and readily available memory sticks.

Joystiq has uncovered discussions from Microsoft that point to the new functionality, which will help users ease their reliance on the device's hard drive.

Devices from 512MB to 16GB of storage will be supported, meaning that Xbox users can utilise increasingly cheap and available memory sticks for game and data storage.

"USB storage devices may, however, have far greater memory capacity than MUs [Memory Units], and may therefore support previously infeasible operations-such as installation of a full disc-based title," reads the document.

Joytiq also points out that by creating a cap of 16GB, Microsoft is not going to impact on its lucrative sale of hard drives for the console.