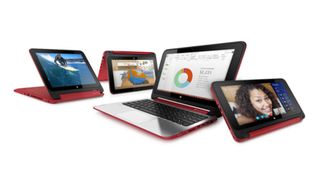 HP has announced a new convertible laptop PC at MWC 2014, and it's been taking a few style cues from Lenovo's Yoga range by the looks of things.

Called the HP Pavilion x360, it takes the form of a touchscreen-equipped convertible that totes a 360-degree hinge, allowing you to use it as a laptop or a tablet.

The device is designed to cater for a wide range of uses, from gaming and social media to video chat and work collaboration.

HP is also bringing its Slate VoiceTab collection, released in India in February, to Europe and the Middle East, with 6-inch and 7-inch models on the way.

The Android-powered devices feature quad-core processors, with dual SIM standby mode, stereo speakers, two webcams, and up to 32GB of expandable storage via an SD card.

The 7-inch version comes with two years free HP DataPass, granting 250MB of 3G connectivity per month without the need for a contract. DataPass is powered by Fogg Mobile and is available immediately in the UK, with expansion to the US and other locations due in the summer.