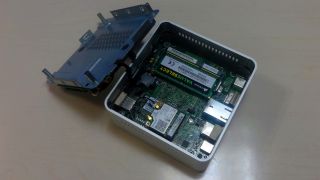 The entire roadmap of Intel's Next Unit of Computing (NUC) range has been leaked and shows some interesting readjustments that will position NUCs as decent replacements for traditional full-size computers.

According to slides leaked by Fanlesstech, the next NUC to ship will be a Maple Canyon model powered by a Core i5, specifically the 4300U. Other than V Pro and TPM, it's worth noting that it will offer both M.2 and a SATA 3 port with optional 2.5-inch drive. Intel has also opted to add NFC and an unidentified (and possibly undocumented new) feature called "WCHG HDRs".

Next year will also see the addition of four Broadwell-based NUCs in Q1 2015 and a Braswell-based one in the second quarter of 2015. The latter, which carries the codename Pinnacle Canyon, can accommodate only one SO-DIMM and will come with a VGA and an HDMI port.

As for the Broadwell models, they will aim for mainstream gaming, content creation and immersive gaming - potentially targeting the same audience as Steam PCs - with the ability to drive 4K displays.

We note with interest that the entry price of NUCs which are essentially NetPCs has been steadily dropping. You can now get a number of models for well under £100, which makes us wonder whether Intel partners are not finding the giant's latest initiative somewhat disruptive to their business.