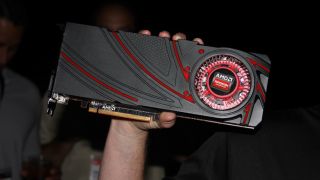 It's been several years since AMD's last big PC product announcement, but today in Hawaii the company announced several new cards based on their latest GPU architecture.

Having achieved a veritable coup by providing the essential technology underpinning both the Xbox One and PS4, AMD underscored its commitment to PC gaming today with its latest flagship GPU, the Radeon R9 290X.

In addition to the flagship Radeon R9 290X graphics card, AMD announced a top-to-bottom line of graphics cards that it believes offers something for every gamer.

Last night on board the USS Missouri, AMD's Matt Skynner showed off the card. While details are minimal, a few things jump out at us.

Notably, the Crossfire connectors are gone. Crossfire will now be handled via PCI Express. Additionally, the Radeon R9 290X will sport two DVI outputs, a DisplayPort output, and an HDMI output.

A closer look at the card raises more questions than answers.