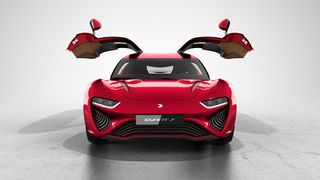 Having unveiled the impressive Quant e-Sportlimousine at 2014's Geneva Motor Show, NanoFlowcell will be taking things even further at this year's event by unveiling a new model that offers more power and an increased range.

The Quant F is certainly a striking set if wheels. Its enormous gullwing doors swing open to reveal space for four passengers, while its imposing length of 5,257mm calls to mind the Star Destroyer from the opening of Star Wars.

The price of power

Producing a formidable 800kW – 120kW more than its predecessor – NanoFlowcell has also tacked on an extra 200km to the Quant F's range, racking up an impressive total of 800km. While the Quant F normally runs on all-wheel drive, greater range can be achieved by uncoupling the front axle.

The car's entirely carbonfibre body reduces weight, while its superior aerodynamics help it reach its impressive top speed of 300km/h.

Are you keen to park one of these in your garage? Well, pricing will likely be announced at the Geneva Motor Show, but as its predecessor came in at around $1.7 million we'd recommend that you start saving now.