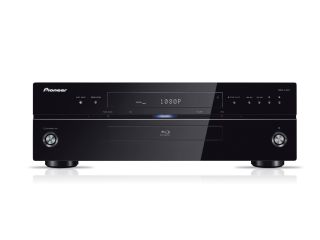 Pioneer has officially announced the launch of its latest flagship Blu-ray player: the BDP-LX91.

Boasting BD-Live compatibility, Pioneer's newly developed 16-bit video engine and the company's Adaptive Bit Length Expansion technology – think pure colour – the LX91 has been touted by the company as being of reference quality.

When it comes to audio, the player offers 7.1-channel Dolby TrueHD and DTS-HD Master Audio decoding, along with bitstream output. This is impressively backed up by eight Wolfson Audio digital audio converters.

The added bonus of two HDMI ports means that you can have separate video and audio channels from the system, especially useful when you want it connected up to a meaty amp or projector system.

You won't get any audio leakage from the system either, all thanks to the system's aluminium body. Finally, the Kuro link means that if you already use Pioneer products the BDP-LX91 will link seamlessly with your TV's remote.

For a more in-depth look at the BDP-LX91, check out Home Cinema Choice's blog, where they have reviewed the machine and given it a spotless 5-star rating, calling the system "Blu-ray royalty".