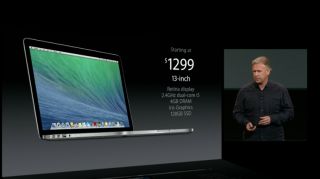 The 13-inch MacBook Pro Retina is going to be faster and lighter than the previous generation. It's 3.46 pounds and 0.71 inches thin, announced Phil Schiller, Apple's senior vice president of marketing.

That means, even with the high-resolution screen, it has 9 hours of battery life. The notebook also comes with Iris integrated graphics, 802.11ac Wi-Fi and a Thunderbolt 2 connection.

Also, like the 13-inch version, the bigger MBP has a longer battery life, clocking in at 8 hours, according to the company.

Its Iris-integrated graphics can be boosted by an optional GeoForce GT 750 card upgrade, and all configurations come with 802.11ac Wi-Fi and Thunderbolt 2.

Both the 13-inch and 15-inch MacBook Pro Retina display updates start shipping today, noted Schiller, and are on sale in the Apple Store online right now.