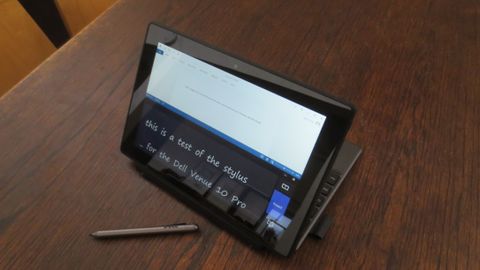 With specs that fit the average school day, and good-enough performance, the Venue Pro 10 5055 is besieged by ho-hum performance and malfunctioning connectors.

The question of classroom technology has been asked, without a substantial answer, ever since the days of fjording the rivers in Oregon Trail. While some companies make pledges to sell bulk amounts of well-built units at a discount, some argue that the best thing that can be done for the masses is to make cheaper-to-produce devices that can be sold at an affordable price.

Enter Dell's new line of Venue 10 Pro tablets, which combine an updated Atom processor with all the standard requirements for modern computing. The 5055 model, as reviewed with Dell's Venue Keyboard and Active Stylus, will set you back $464 (around £310 or AUD $595), and is the spec'd out version of the educational set of the Venue product line. It features a larger hard drive (64GB rather than 32GB) and it's 10.1" display has higher pixel dimensions (1920x1200 as opposed to the entry level 1280x800).

The bottom line of the budget may play the largest role when purchasing a computer for the education set, so I was pleased to see the 5055 come in at such a low price. Sure, Apple's iPad Air 2 is a mere thirty-five dollars more at $499 (£399, AU$619), but that's without the keyboard and stylus. And while Microsoft's now offering a bag-lunch-budget-friendly Surface 3 (also for $499) that's also prior to adding on their keyboard and stylus, which bring your total to $679.

If you're not tied to the Windows platform, and you're considering an Android tablet to center your studies around, there is the 2014 edition of the Samsung Galaxy Note 10.1 to consider. As its name suggests, it has the same size display as the 5055, but it also shares uninspiring performance, something that can't justify its $740 ( around £450, AU$820) price tag. It's a feature rich and experience-thin device that our review can turn you away from if need be.

Aesthetically, there is not a whole lot to say about the Venue Pro 5055's design. With its price, though, I didn't go in expecting that to be a big difference maker. The 5055 does have a nice rubberized edge, which makes it very grippable. For kids, that's a great feature. It's not exactly ruggedized or shockproof, though, something that would make it even more classroom-friendly. At the same time, the frame of the 5055 isn't that well thought out, since the power button and the Windows button are of the same size and shape, on adjacent corners of the tablet.

The other major problem in the build of the 5055 comes when you dock the tablet into Dell's Venue Keyboard. The first few times I thought I had connected the two devices, the keyboard failed to securely attach, inevitably leading to awkward accidental detachments. It mostly happened during my first days with the 5055, but it would even occur after audible chimes had signified the two had docked. My advice is to check each and every time you connect the two, I ended up having a first-attempt success rate of about 75%.

The keyboard is okay, but the trackpad has some problems. It may not be jumpy and finicky like other low-end input devices, but most of its surface does not allow for physical clicks. Only the bottom third of the trackpad allows for that kind of clicking, and it always requires what feels like far too much force to register a click. The keyboard was good enough for typing quickly, though. On the 10FastFingers test, I eked out 66 words-per-minute, a very slight decrease from my standard of 67 wpm on my personal mechanical keyboard. The keys feel a little cheap, but not to any severe detriment.

Next Page Display and performance