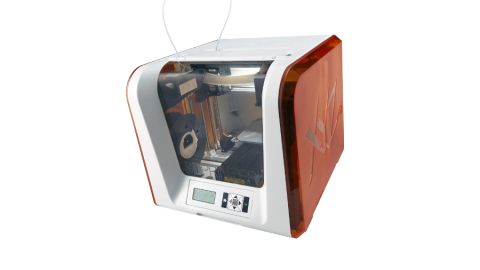 The Da Vinci Jr. might not have headline-beating print resolution, but its design and ease of use mean that it's one of the most solid introductions to 3D printing on the market.

XYZprinting has been producing budget printers since 2013 and unlike many other companies, such as Ultimaker, which has developed printers with fast print speeds, material compatibility and resolution, XYZ has strived to make the technology simply accessible and cheap.

The Da Vinci range of printers aims to give the less tech-savvy user an inexpensive way to get into 3D printing. XYZprinting printers have always been exceptionally well-designed featuring fully enclosed cases and a professional finish that is in stark contrast to more expensive 3D printers, such as the Lulzbot Mini which still looks like it's been built in a garage.

The reason that the XYZprinting machines are so cheap is because the company has a clear mission to build the best machine possible for the cheapest price that will reach the greatest amount of people. This means that components such as bearings will be brass or nylon rather than ball or polymer. The hot-end where the filament is melted will be a basic model, and rather than using high precision lead screws, threaded bolts will be used.

There is a careful balance to be met between cost and quality and this is certainly true with the Da Vinci Jr. From the outset, this 3D printer proves to be something exceptional for the price.

The Jr. is the smallest and lightest of the XYZ printers, but as XYZ don't build anything small it can really only be called 'junior' when compared with the rest of the XYZ range. Up against an Ultimaker 2 it looks big, and against the Ultimaker 2 Go it looks huge! Weight-wise however it's relatively light at 15kg, and transporting the printer around is easy enough, although unlike its larger sibling the Da Vinci 1.0 there are no hand holds cut in the side.

Although not small it has a footprint of 42 x 43 x 38cm which is much more manageable than the original XYZprinting Da Vinci which had a colossal footprint of 46.8 x 51 x 55.8cm.

Build quality is a major factor for XYZ, despite the printer being in the budget price range – it's priced at around £270 at the time of writing ($339 over in the US, which is AU$480). The plastic formed shell and T-Slot tubed interior creates an ultra-solid platform for the moving parts. Wobble and vibration can be a major issue for 3D printers so the more solid the frame the better the print you can expect, and this is definitely something that the company realises and takes into account with the design of its printers.

The entire printer is covered with a solid top, sides and base so during the print process as long as the top-hinged door is closed there's no way that stray fingers can get burnt.

On the side of the printer is the USB port for firmware updates and tethered printing as well as the power socket. On top of the machine the filament feed pipe can be seen and this moves within the slot during the print process.

The Junior is only designed to print PLA and this is supplied by XYZprinting at a competitive price, although at present the range of colours and finish for the filament is limited. Due to it only needing to print PLA the print bed is unheated and measures an impressive 15 x 15 x 15cm.

On the inside left is the filament reel which needs to be clicked into place when first commissioning the printer. On the front mounted control panel is a small LCD to show menu options and a handy navigation pad, along with an SD card slot for card printing.

Next Page Setup and printing