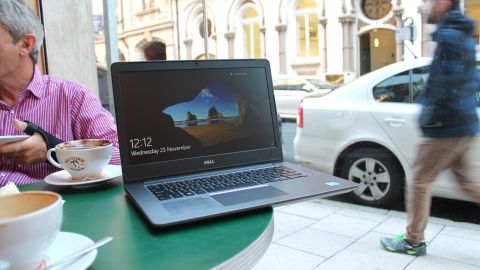 It may not feature a cutting-edge design, but Dell's Vostro 14 5000 sports impressive battery life and includes legacy ports for business users.

Dell is appealing to on-the-go small business workers who may be on a fairly modest budget with its refreshed Vostro 14 5000, which benefits from Intel's new Kaby Lake CPU architecture.

It's available in two colors: 'Graphite Silver', which our review model came in, and 'Graphite Red'.

Seen from above, the Vostro reminds us of one of Toshiba's low-end Satellite-series models, though thankfully Dell has chosen not to place the trackpad to the left-of-center, instead keeping it down the middle.

The Dell's appearance is far from offensive – it just looks dated due to the bulky thickness of its rear. Despite featuring a tapered design, at 18.5mm thick, even the front of the machine is around double the chunk of top-line models such as Dell's own XPS 13.

For business users, the major benefit it brings is the inclusion of vital ports, including VGA (for hooking up monitors or, most likely in 2016, projectors), HDMI, Ethernet, two USB 3.0 ports and one USB 3.0 port with PowerShare.

With a starting weight of 3.4lbs for the non-touch model, the Vostro is almost a pound heavier than the more svelte HP EliteBook 1030. But then, it retails at almost one third of the price.

The Vostro sports an attractive chiclet-style keyboard with well-spaced keys featured centered lettering. The keys are comfortable to strike and possess enough travel to not make your fingers sore after prolonged use. It has reasonably-sized shift, backspace and arrow keys, and its trackpad is smooth enough to be used in place of a mouse without tearing your hair out.

On the other hand, the Vostro's LED-backlit display is underwhelming. Adequately bright, it's distinctly lacking in color saturation with only average viewing angles.

It does, however, managed to stave away reflections well thanks to its anti-glare coating. Its biggest problem is the pixel-resolution, which tops out at a lowly 1,366 x 768.

This hardly leaves any room for working with multiple applications side-by-side, so you'll need to hook it up to an external monitor to get stuck into any real work effectively.

The Vostro's performance is adequate for the cost, its Intel Core i3 processor scoring only 500 less points in Geekbench 3's Multi-Core CPU benchmark.

Whether browsing websites in multiple browser windows, streaming HD video or editing images, the Vostro ticks along, but things start to get hairy when you're working with tens of tabs and multiple applications open at the same time – which is inevitable due to its maximum 4GB of memory.

All three configurations available on Dell's website max out at 4GB of RAM, so how nippy you want the Vostro to work ultimately comes down to whether you opt for a HDD or SSD inside, the latter bringing a substantial speed boosts when it comes to undertaking everyday computing tasks.

Battery life is where the Dell Vostro 14 5000 truly impresses. A combination of a not particularly great display and Intel's seventh-generation Kaby Lake processor makes for some impressive runtimes.

Apple has been doing the trick for years with its MacBook Air models, and while the 14 5000 can't compete in other areas, it's on a par in this department.

The Dell 14 5000 Vostro has two things going for it: it's fairly affordable, and it offers superb battery life – enough to get you through most long-haul flights if you keep the display's brightness turned down. Its performance isn't too shabby for the cost either.

These come at the expense of a middling display that makes it practically impossible to do any real work in the absence of a an external monitor. If you work with one application or browser window open at any one time and require an affordable Windows machine that lasts a decent amount of time away from a plug socket, the Vostro 14 5000 is worth your consideration.