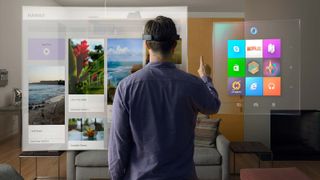 It's thought that the Asus glasses will use Windows Holographic, as seen on HoloLens

Asus has confirmed that it is indeed now working on AR hardware, and wants to follow in the footsteps of Microsoft by launching its own version of the HoloLens (pictured above).

It was known that the firm had been considering such a gadget previously, but it's now been confirmed by the chief executive of Asus during a recent webcast in which he mentioned that the company was planning on producing its own AR headset.

And the device could be out as soon as 2016, according to CEO Jerry Shen.

CNET reports that Shen stated: "It should be next year when we come out with a product ... we think AR (augmented reality) will be very important for people's lives."

By the sounds of things, it's going to be a cheaper version of Microsoft's AR goggles aimed at a wider market, and rumour has it that the device will use the Windows Holographic operating system as seen on the HoloLens.

Asus doubtless won't be the only manufacturer stepping up with augmented reality hardware, and indeed last month, we reported on an Amazon patent for smart glasses which could display video right in front of the wearer's eyes.

If virtual reality is about to kick into a higher gear at the start of next year with the release of the likes of Oculus Rift and HTC Vive, it seems like augmented reality won't be too far behind…