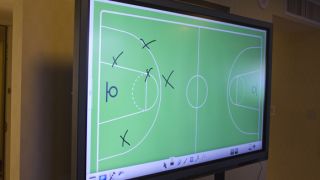 Westinghouse may not be the biggest name in the TV biz right now, but the company did bring some eye-catching products to this year's CES.

It's playing the 4K game like just about every other TV maker, but unlike its competitors, Westinghouse is also thinking beyond the living room.

Westinghouse envisions the giant touchscreens being used in business settings, for presentations and meetings, as well as in classrooms. Interestingly, they can come with an optional "PC module" that mounts on the back and runs Windows 8; alternately users can plug in their own Windows 7 or Windows 8 computers.

You can use your fingers to draw and tap on the interactive whiteboards, but they also come with a fat "touch pen" stylus.

The whiteboards come with special software, called WScribe, that provides handwriting recognition, drawing tools, special interface features, and more that should be perfect for education and business settings.

This interface software also provides various templates, like a football diagram that can be used to map out and discuss plays.

With the provided touch pen stylus, we wrote "TechRadar" on the screen over a video playing in the background. The whiteboard failed to recognize our admittedly imperfect cursive, though when we switched to normal writing it had no trouble translating it to typeface.

Westinghouse Marketing Communications Manager Brett Hunt said it will learn users' handwriting over time, so your chicken scratch should be legible after some quality sessions with the boards.

Aside from failing to pick up our script, these whiteboards looked gorgeous and felt great and responsive to use, whether with fingers or with the stylus (Westinghouse likes to brag about its (6-point Touch system with Intuitive Rapid Response").

Westinghouse also had numerous TVs on display, including full HD and Ultra HD sets ranging in size from 39- to 85-inches. But its two other televisions, a Smart TV and an adorable retro-style unit, were more interesting by far.

Unfortunately, both are just prototypes for now. Westinghouse doesn't currently offer any Smart TVs because the company believes most consumers already have game consoles, set-top boxes, and other devices capable of running apps like Netflix, Hunt told TechRadar.

And the company has no plans to develop a Smart TV for market on its own, though "we might partner with somebody else to develop [a Smart TV] with us," Hunt said. "We don't have a set date for that yet."

More interesting was the 22-inch 1080p "retro" TV also present in the company's suite. The set looks like what people in the 60s thought the future would be like - it's anachronistic, both old and futuristic at the same time.

"If you had an extra room that's a retro room that would be kind of cool," Hunt said of the set. "It's like The Jetsons and The Flintstones combined."

The picture looked great - despite all the 4K hoopla, full HD is far from outdated - and the design was utterly charming. All it needs is some fake bunny ears, and it could easily sit on the shelves in Urban Outfitters next to coffee table books about marijuana, novelty camera lenses, and slinkies.

Unfortunately that may never occur, as Hunt said the company brought the retro TV to CES simply to gauge people's response to it. The ironic thing is that it was easily the most striking thing Westinghouse has produced in some time - so here's hoping they follow through.