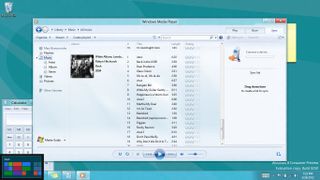 Don't get used to Aero in the Windows 8 Consumer Preview

Microsoft revealed today that Windows 8 will no longer have an Aero-style interface.

Instead of the Aero-style glass effect that was introduced in Windows Vista, Windows 8 will feature a more flat, neutral colored UI.

As Harris put it, "we have moved beyond Aero Glass - flattening surfaces, removing reflections, and scaling back distracting gradients."

This is a shift from what was being said last year, with the Windows 8 desktop being dubbed "Aero Lite."

Many reasons for the change are stated in the blog post, most of which revolve around compatibility with existing Windows 7 applications and creating a clean interface that doesn't distract from the actual content on the screen.

They are good points, but perhaps not the most important benefit of cutting Aero out of the UI.

Perhaps Microsoft wouldn't like to say it, but they know Aero is kind of a resource and power hog.

On a desktop PC the effect on performance is negligible, if even noticeable at all, thanks to the constant stream of power flowing to the machine.

Notebooks are a different case though, as the GPU's extra effort can take a toll on performance, power consumption, and system heat.

Many users already opt to turn off Aero effects in Windows 7 due to the drain on lower-spec machines.

And with Windows 8 making a big push for the notebook and tablet market, those are exactly the machines being targeted.

For those who have grown to love Aero, they will at least find some solace knowing that only the cosmetics of Aero are being sacrificed, with features such as application previews still accessible through keyboard shortcuts.

Microsoft is taking the unified experience of Windows 8 across multiple devices very seriously, both in how the desktop looks and how it runs.