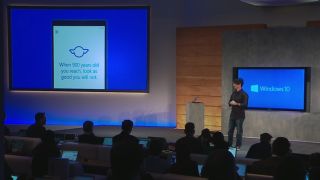 What Windows 10 means for consumers

Microsoft has revealed more about Windows 10, this time focusing on the consumer version of its next-gen OS. Details were outlined during a two-hour Redmond event, though the features won't release for at least three or five months - or more - down the road.

The first new feature detailed was Cortana on the PC. That's right, Microsoft's personal assistant is coming to your computer thanks to Windows 10, delivering what Microsoft calls a more natural way of interacting with the hardware.

The voice-powered search assistant works much like the Chrome OS browser; ask her who's playing in the Super Bowl, and it will relay the answer audibly. The assistant has an integrated search capability so it can pull up things unique to the PC, such as computer files.

Microsoft's Joe Belfiore reiterated Cortana's role as a personal assistant, so in addition to asking her general search-related questions, users can get details about their own lives, including calendar events, flight information and items related to personal interests. Belfiore noted the information is whatever a user lets Cortana know, a reassurance that it won't collect information you don't want it privy to.

Belfiore also detailed a number of universal apps, what he called "a family of apps to give customers everything they need for modern productivity for phone and PC."

Office apps were the first to be outlined, and the new suite essentially offers a device size-optimized experience across phone, tablet and PC. New versions of Word, Excel, PowerPoint, OneNote and Outlook feature this universal design and function principle.

Word is fully functional on a any-size device, and PowerPoints don't lose any of their panache on a smaller screen. Users can continue working on a shared document from phone to PC without loosing functionality (ahem, Google Drive).

More universal apps will ship with Windows 10. Photos, for example, will be universal and can aggregate images from all a user's devices to give them a full view of their collection. Videos, Music, People & Messaging and Mail & Calendar will be built into Windows 10 and offer a consistent experience across devices. Data will be stored and synced in OneDrive, so users can pick up any Windows 10 device and continue where they left off.

The new Office desktop suite is under development, with further details due in the coming months.

A new build of Windows 10 is headed to Windows insiders in the next week.