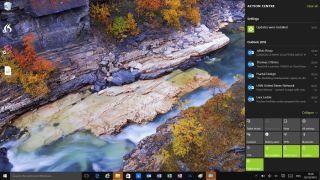 It's a new month, and so we have a new round of figures concerning desktop operating system market share – and Windows 10's performance is being scrutinised very closely, with another slowdown evident.

These figures are from NetMarketShare (as spotted by Betanews), and they show that for November, Windows 10 managed to snare a 9% share.

That's a healthy enough figure considering the OS hasn't been out that long, but Windows 10 only increased its share by 1.06% last month, compared to an increase of 1.31% seen in October.

That's not a huge difference of course, but it does continue the trend of a slowdown since the OS got off to a blazing start out of the gate.

Indeed, other bean counting firms have also observed this slowdown in recent times, with the likes of Stat Counter reporting a much more considerable drop in its figures for October (with a 1.36% increase seen that month, compared to a 2.26% jump the previous month – a much bigger difference).

Windows 8 on the up

Whichever way you look at it, this isn't great news for Microsoft, which absolutely must have Windows 10 seen as a big success, particularly after the flop of Windows 8.

Windows 10 still hasn't muscled its way past XP, though.

Microsoft is set to push Windows 10 harder in the future, of course, introducing it as a recommended update next year – and we've noticed more frequent (and more prominent) pop-ups in our Windows 8.1 installation urging us to upgrade over the past couple of weeks.

Redmond needs to be careful, though, that any heavy handedness in terms of persuasion doesn't backfire and make users dig their heels in and refuse to upgrade.