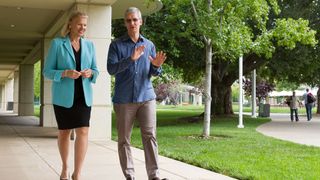 Apple really wants your organization to make the switch from Windows. IBM and Apple are co-producing business-based apps for the iPad Pro to help simplify tasks and eliminate unnecessary paperwork.

Since announcing a partnership last year that brought IBM business apps to Apple's iOS environment, the two tech giants have now co-produced more than 100 apps for the iPhone and iPad.

The IBM-built iOS apps span 14 different verticals, including healthcare, financial services and retail. The tools combine IBM's data and analytics capabilities with Apple's mobile operating system. The partnership is designed to lure business users away from Microsoft's Windows operating system and onto Apple's Mac OS for desktop and iOS for the iPhone and iPad.

How the Pro apps will work

It is immediately unclear how the iPad Pro-specific apps will differ from the 100 apps IBM has already created for Apple. However, Apple has been given a bit of grief for launching the productivity-focused iPad Pro on the mobile iOS operating system, rather than taking advantage of the desktop-based Mac OS.

No, iPad Pro users wouldn't be able to multitask or run the same processor-heavy tasks as they would on high-end Surface device, but the large format iPad Pro, backed by IBM's analytics, give business users who prefer iPhones and Macs a capable productivity device that can easily be transported from the factory floor back to the office without having to switch computing environments.

What have IBM and Apple done so far?

The two companies have created a host of applications designed to provide healthcare providers with easy access to patient records, simplified hospital ward management and patient monitoring tools, among other apps.

Apple and IBM offer its clients 24/7 IT support, AppleCare for Enterprise, for all Apple hardware and operating systems. As part of the package, Apple will replace up to 10% of a client's iPad and iPhone devices at no additional cost if the hardware is lost or damaged.

Additionally, IBM has made some of the MobileFirst iOS apps available on the Apple Watch, thereby extending the benefits of the applications to the wearable environment.

This isn't the only monumental partnership between the two tech giants this year.

IBM has adopted as many as 50,000 MacBooks for employee use. It is estimated that up to 75% of IBM employees would make the switch from Lenovo-branded ThinkPad notebooks to MacBook laptops by the end of 2015.