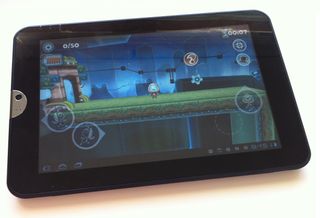 Thriving - but not in the UK until tomorrow

The Toshiba AT100 tablet UK release date has been announced, with those keen to get their hands on the Android Honeycomb device only having to wait until 1 September.

The AT100 – formerly named Toshiba Thrive – has been given a less funky moniker for launch but still offers up an Nvidia Tegra 2 processor and Android 3.1.

The Toshiba AT100 sports a 10.1 inch display, with Toshiba Resolution+ image enhancement and 'innovative sound technology'.

The tablet also features a 7 hour battery life for multimedia playback and a weight of 765g.

"Front and back cameras also provide the perfect combination for mobile video chat and high quality still and video photography."

You can also check out TechRadar's Toshiba AT100 review for our impressions of the new tablet.